Today we give you He 111 H-6 for the early access. This magnificent aircraft completes the IL2BOS hangar making it all 10 planes that we planned to create - and we did it. Still there is one BUT - we release it without bomb load this week. Next Friday update will contain necessary corrections

Also today we update the game version implementing massive changes in the multiplayer, improving its technical features. We count on performance improvement however we don't know yet how big this improvement will be. Also some technical issues are expected so don't be surprised if multiplayer mode crashes - we're testing the new system, it's still WIP.

The team is working hard and there’s still a lot to do. But the work is not just for the in-studio employees.

Some of you already know that a small group of enthusiasts is engaged in a voluntary project - creating an additional content for BOS. For instance, Tatarenko has presented us his first singleplayer missions and we’re considering an opportunity to add them to the game. Also earlier this week I’ve asked the lead designer of another small team, Zeus to tell more about their remarkable project which is highly awaited even by us.

We’re in love with the sky with our whole hearts. Most of us have been flight enthusiasts since childhood, attending modeling clubs (I personally have a grade in RC modeling) and reading tons of aviation related material. But circumstances weren’t always smooth for each of us and only a few actually work with planes.

For people like us flight-sims are the only chance to virtually touch the sky. That’s our sort of escapism: get back home from work, let the family sleep, get to the room and “fly” for an hour or so.

And we started building our own map - Novosokolniki. We approached the dev’s with our idea and discussed it with them. They said that they know about this piece of history, but they’re simply short of resources and time to make such a campaign. But players may try this challenge and make a small map for the two planes by themselves.

So, we decided to create a “semi-historical” map. I call it semi-historical because the game industry is not yet capable of recreating realistically sized territories exactly the way they looked back then in 1942. The work started in August 2013. We spent a few months learning the technologies, researching and categorizing all the info including wartime maps of the Red Army and Wehrmacht including aerial footage and photos. After several months of development a base for the map was finished: landscape, rivers, forests, roads, rail tracks and villages. We modeled several types of buildings that are not available in the original game, such as churches and rail stations. We've also learned how to enriche the vegetation with spruces which are naturally not presented in the Stalingrad region. I’m glad to admit that we learned to use the editor within a relatively short period.

In addition to the changes that have been mentioned above we plan to add the Novosokolniki map to the game today. It should be available in multiplayer to all IL2BOS players. 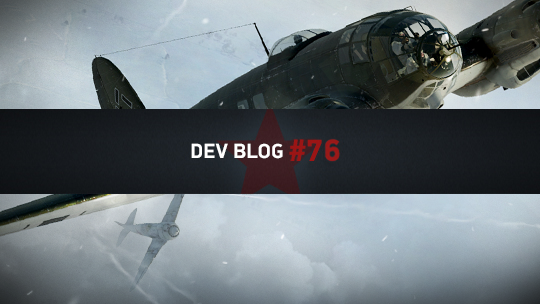