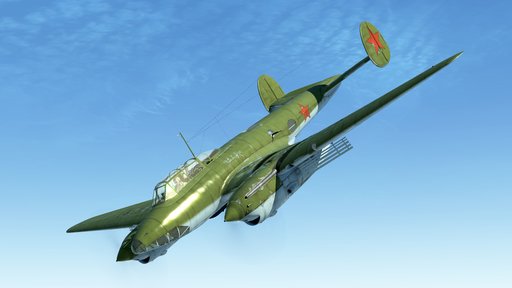 Dear IL-2 Sturmovik players!
Our team is proud to present you the new update 1.107. Preparing it was not an easy task, since it brings three new planes at once: Bf 109 F-2, IL-2 mod.1941 and Pe-2 series 35. In addition, there are many fixes and a number of improvements. Thankfully, we were able to finish it in time, thus delivering three new planes to Battle of Moscow owners in the end of January, as it was promised. You can learn about main features of these planes in our developer diary #117.
The work on the remaining Battle of Moscow content continues according to plan and the next update will bring you the final, 10th, aircraft of BoM project: German bomber Ju 88 A-4. Moscow map is closer and closer to its final look and the work on the campaign continues as well. Therefore, we plan to finish the entire project in time and release it to you this spring. Here is the change list for today patch:
Main changes:
1. Bf 109 F-2, IL-2 mod. 1941 and Pe-2 series 35 are available to players who pre-purchased Battle of Moscow. Those who only have Battle of Stalingrad can set them as AI controlled planes in single player or encounter them in multiplayer.
2. Smoke, tracers and exhausts are now affected bywind.
3. Roadside grass added.
4. Random "Can't load object" error that could pop up in multiplayer when attacking ships fixed.
5. Multiplayer server hangup with "void SysOrientedTrail::drawNormal" error fixed (it was caused by large number of vehicles nearby).
6. Plane gunners won't die anymore when its pilot bails out (bug introduced in 1.106).
7. Joystick ID preservation system improved, should work for 3+ controllers.
8. Critical speed (when rudder and ailerons start to shake) increased for all Bf-109 modifications (based on German test report and several pilot memoirs).

Bomb changes:
28. German bomb detonators now function correctly when dropped from extremely low (5-10 m) altitudes.
29. Bombs roll correctly after being dropped.
30. Pe-2 bombs located in engine gondolas now disappear correctly in an event of a wing loss.
31. Now you can watch a rocket during its flight just like a bomb - by pressing F6.
32. Large German bombs can be seen correctly through Ju 87 floor hatch.

Other changes:
36. Yak-1 landing gear cover no longer floats in the air after wing loss.
37. Hit effects corrected, they appear closer to a fast moving plane.
38. MiG-3 3D model corrected.
39. It's no longer possible to load both types of ammo into player tank gun simultaneously.
40. Multiplayer difficulty presets correctly affect points awarded to players.
41. Bf 109 F-4 and G-2 wheels color corrected.
42. Damaged MiG-3 is now correctly visible from large distance.
43. Bomb racks positions corrected for all Bf-109 and Fw-190.
44. Added additional logging information to find a cause for random game crash with error message about memory address. If you encounter such problem, please make a screenshot, close the error window and the game and send us the <game_folder>\data\_gui.log file (don't run the game again before you send it since it is wiped on each game launch).