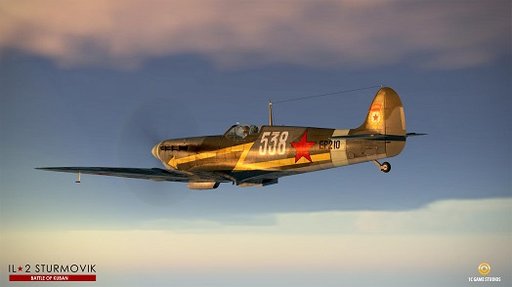 So, let's talk about Supermarine Spitfire Mk.VB. It took off for the first time in December 1940 and saw extensive action in both Europe and North Africa. Some were also sent to the Soviet Union via the Lend-Lease program for use on the Eastern Front. However, the Spitfire V was considered to be a relatively old plane by the time the battle of Kuban begun in Spring 1943.

The Vb variant was armed with two 20 mm Hispano Mk. II cannons and four Browning .303 machine guns. The cannons were magazine-fed with 60 rounds per gun, while the machine guns had 350 rounds per gun. The lend-lease aircraft sent to the USSR did not have bomb-carrying capabilities and some other equipment was also removed such as the gun camera, landing lights and IFF transponder. Thanks to this, the aircraft became slightly lighter by roughly by 40 kilograms. A special snow-guard was installed in front of the engine supercharger to protect it from dust or snow while taking off. Most of the planes sent to the USSR had the Merlin 46 engine installed, but roughly one-fifth of them were equipped with the Merlin 45. Their differences between the two engines become apparent at different altitudes. The Merlin 46 was designed for higher altitudes like 4-5 kilometers, where it was more powerful, but it was 80-100 HP weaker than the Merlin 45 near the ground.

Spitfire instruments are similar to other planes, but there were some peculiarities. It was equipped with the rudder and elevator trimmers and the elevator trimmer position was shown on the instruments panel. The pitch up range of the trimmer is three times larger than pitch down.

The engine-propeller combination is controlled by the throttle, the automatic pressure limiter switch, the propeller control unit and the mixture control assembly. The throttle is linked to the automatic supercharger: when the throttle is set to any position from 1/3 to full, it sets a pressure supported by the supercharger from -7 to +12 pounds per square inch (PSI) relative to one atmosphere pressure. So 760 mmHg boost equals to 1 ATA and to +0 position on the British boost indicator. The automatic pressure limiter can be turned off to maintain constant +16 boost regardless of the throttle position. The automatic mixture controller maintains the optimal mixture setting if its control level is in the forward position or leaned mixture to save fuel if its control level is in the back position. The mixture control system has been removed on later Spitfires.

Water radiator is controlled by the lever to the left of the pilot seat which has six fixed positions and is set to 40% by default.

The sideslip indicator isn't a small ball like on other planes, but an arrow. It functions essentially the same - there is a pendulum behind the instruments panel attached to this arrow.

The aircraft is equipped with two compasses - magnetic and gyro ones. Gyro compass should be caged up on the ground and while doing aerobatics (in the sim the pilot does on its own). There is a flight timer on the clock that is turned on by the pilot on its own after takeoff and turned off after landing. Upper and bottom formation lights can be turned on simultaneously or independently (RAlt+L).

The horizontal marks on the collimator gunsight are adjustable, so you can use it like a rangefinder. To do this, enter the target distance in yards and the target base (its wingspan) in feet by pressing RCtrl + <, RCTrl + >, RCtrl + ; and RCtrl + /. There is a sun filter on the gunsight.

While taxiing, keep in mind that Spitfire has narrow landing gear and large wings stuffed with weapons and ammunition, so they may touch the ground if you attempt a sharp turn, it also tends to 'circle'. On the other hand, it is stable on the runway during takeoff or landing. Its tail wheel rotates freely and does not have a lock.

Take off should be made at 3000 RPM and +12 boost with the landing flaps retracted. When airborne, reduce the boost to +9 and RPM to 2850 and climb in this mode.

The elevator is very sensitive and has very small stability reserve (the aircraft has a neutral static stability), so control the plane by gentle flight stick movements and don't overdo it. The pre-stall warning shake comes early, but if you continue to pull the flight stick and don't move it forward, the plane may stall and spin even at high speed. Flight manual says that you may enter spin only by a written permission of your squadron commander. Having the papers ready, enter the spin bravely - to recover from the spin, setting the control surfaces to the neutral position is enough usually.

As we mentioned above, the aircraft has a neutral static stability. Therefore, the balanced flight stick position doesn't change during level flight while accelerating or decelerating. However, due to the elevator peculiarities, the flight stick load will change and the pilot should push the stick forward harder as the speed increases. That's why the elevator trimmer has the large pitch down range. The elevator effectiveness is high, so any trimmer position could lead to high-g accelerations (and force pilot to blackout rapidly) at higher speeds in spite of the limited control surfaces effectiveness at high speeds.

The aircraft, especially untrimmed, should be controlled carefully at high speeds, not giving too much flight stick input since the high-g accelerations can potentially lead to a catastrophic structural failure.

The aircraft becomes somewhat unstable with extended landing flaps, but in spite of this, it is easy to land. It's recommended to keep 95-100 MPH speed on the glide path.

The Spitfire is a maneuverable, relatively easy to control and decently armed aircraft. However, its maneuverability which comes from its large wing surface of 22.5 square meters (Soviet fighters had ~17.5 m2 and Bf-109 had 16.2 m2) comes with the price of only a modest maximum speed at lower altitudes.