First of all, about the upcoming early access session: it's an extremely rare occasion when you won't see anything specific, but you will feel it in a new way for sure. The reason is that our in-game physics has reached a brand new level in regards of aircraft systems modeling. From now on our internal combustion engine model takes into consideration the state of atmosphere. For example: its winter outdoors, the air is cold which allows an engine to perform with more power. Here in Stalingrad it is -15C, so the engines have their power increased some.

The up-coming early access session is also going to feature new visual effects and graphical improvements on the Stalingrad map, and spotters in the combat missions as well.

As a dessert - here a couple of screenshots with a freshly added graphical effect of the vapour trail. After necessary fixes and tests it will become active and will be featured in the early access.

Read full blog on the forum.

NOTE: our poll "What media do you prefer?" is still active. Please, check it out and take part. 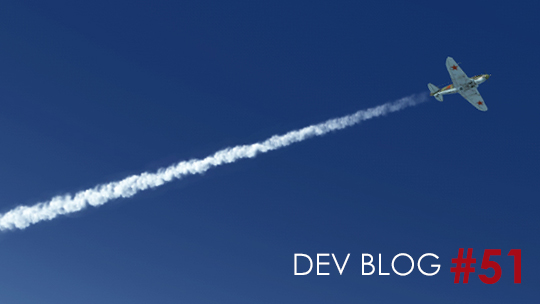