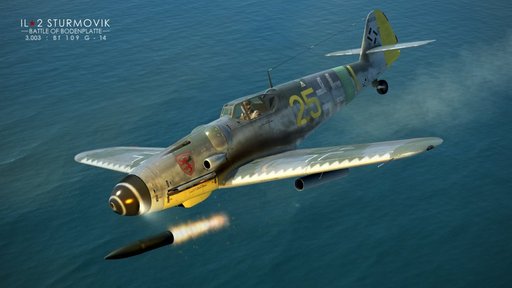 One month after the last update we present you another one. The new update 3.003 starts the Bodenplatte Early Access program - if you pre-purchased it, you can fly the first aircraft from its plane set right now.

At this early stage, only two planes are available -  Bf 109 G-14 and Supermarine Spitfire Mk.IXe (with old pilot models since new, late war ones, aren't ready yet).

Bf 109 G-14 is the last fighter model from 109 'G' lineup. This model has the completely new canopy with the increased field of view 'Erla', transparent armored glass headrest and the increased rudder surface. The more advanced DB-605AM engine is equipped with the automatic water-methanol mixture injector system that engages at maximum throttle, allowing for increased intake pressure and engine power as the result. The running time at maximum throttle has been increased to 10 minutes with less engine overheat and required radiators opening. The aircraft armament is similar to Bf 109 G-6, but it can carry heavy unguided rockets 21cm WGR-21 (9.5 kg of explosives and up to 30 kg of fragments in each rocket). 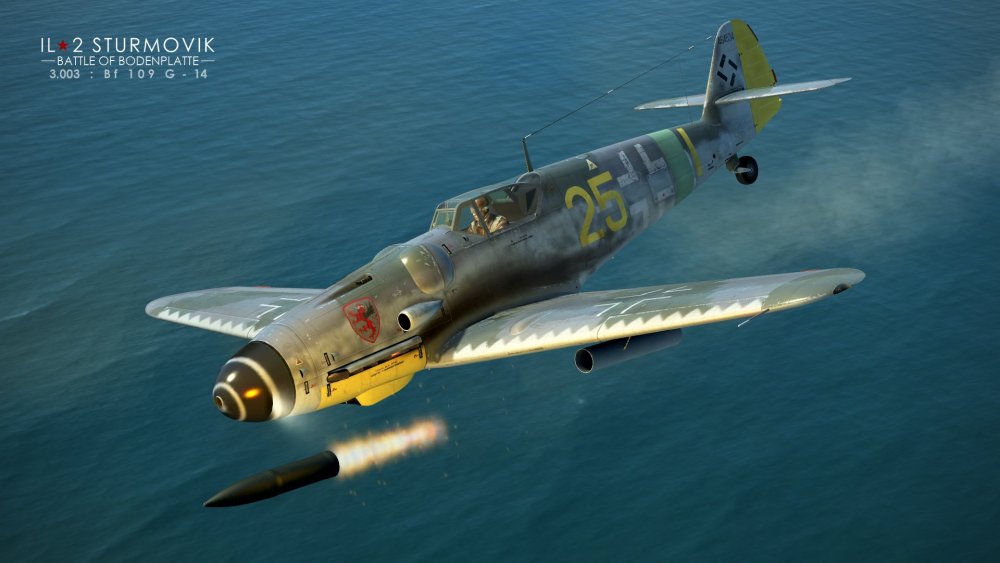 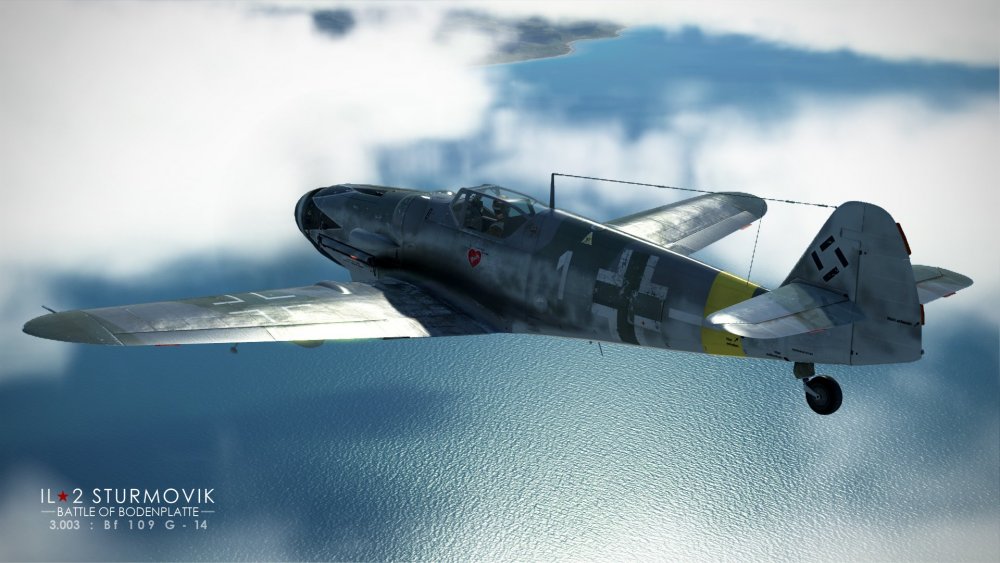 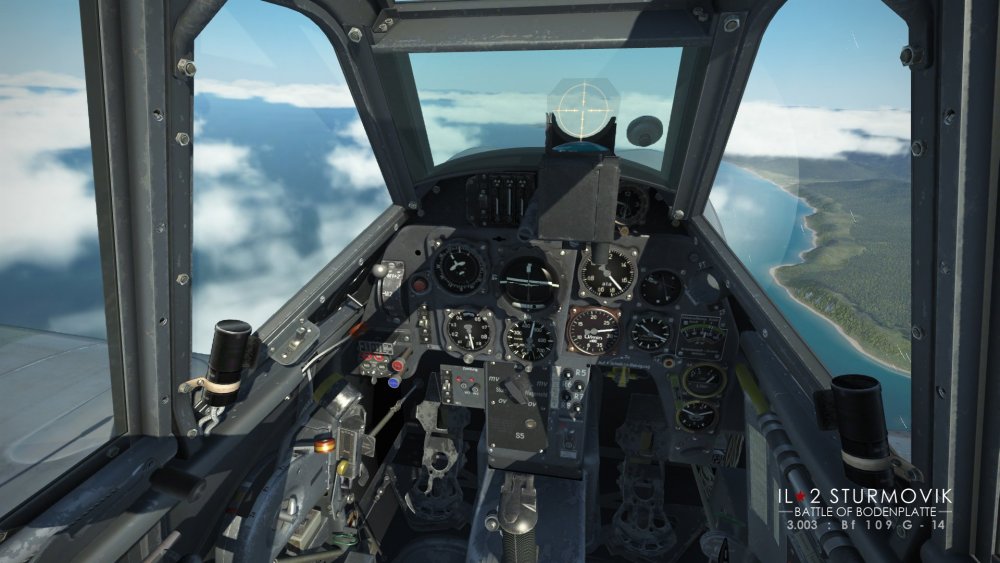 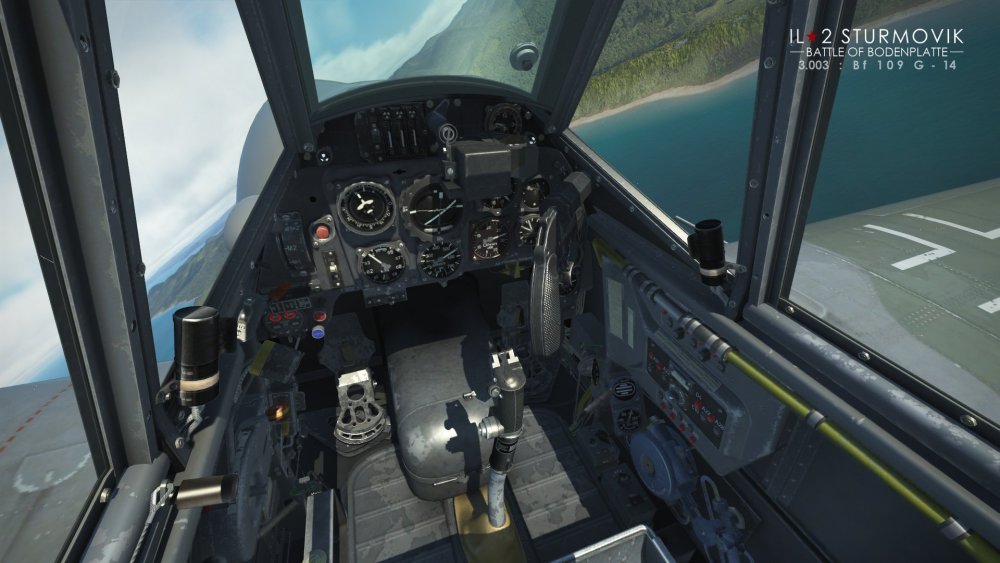 Supermarine Spitfire Mk.IXe is the most well-known and widespread model of the legendary WWII British fighter. Thanks to the number of selectable modifications we have implemented, you're effectively getting four aircraft, not one. By selecting certain modifications, you can have Spitfire LF Mk.IXe (with the Merlin-66 engine for lower altitudes) or Spitfire HF Mk.IXe (with the Merlin-70 engine for higher altitudes) or their modifications with clipped wings. In addition, you can select either the standard Mk.II gunsight or the advanced gyro gunsight G.G.S. Mk.IID that automatically shows the correct target lead provided you have the target base and distance set! Also, unlike the lend-lease Spitfire Mk.Vb, this model is equipped with rockets and bombs. 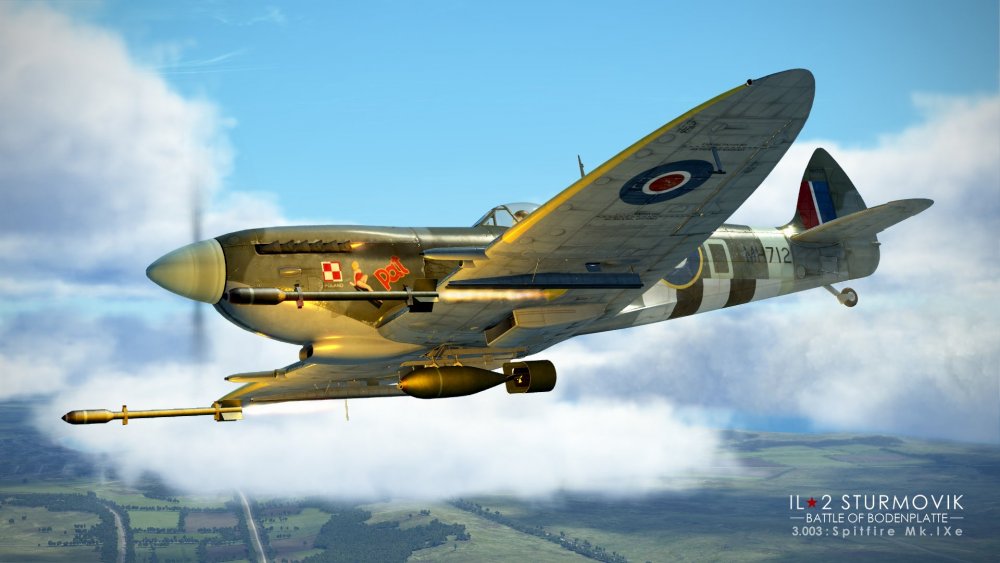 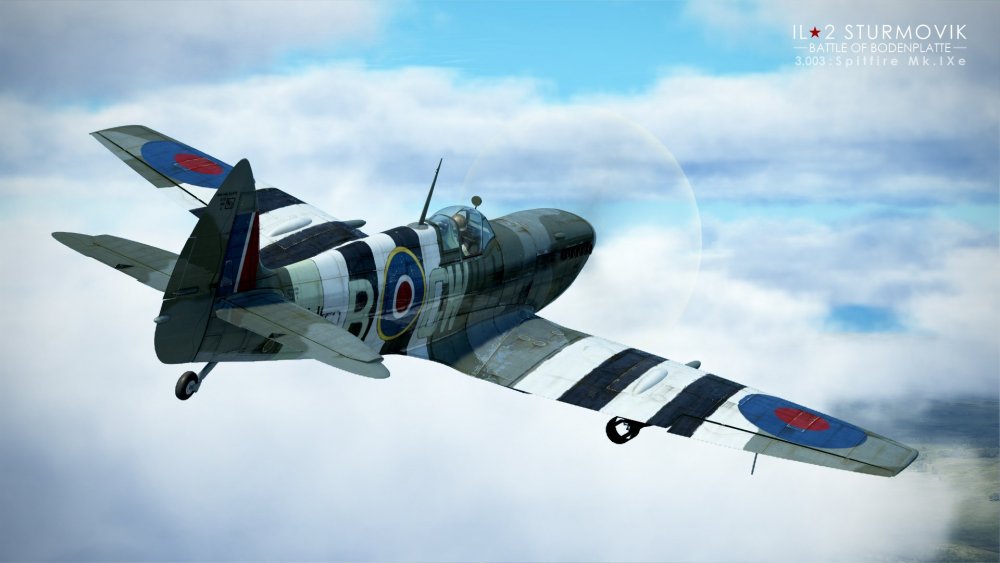 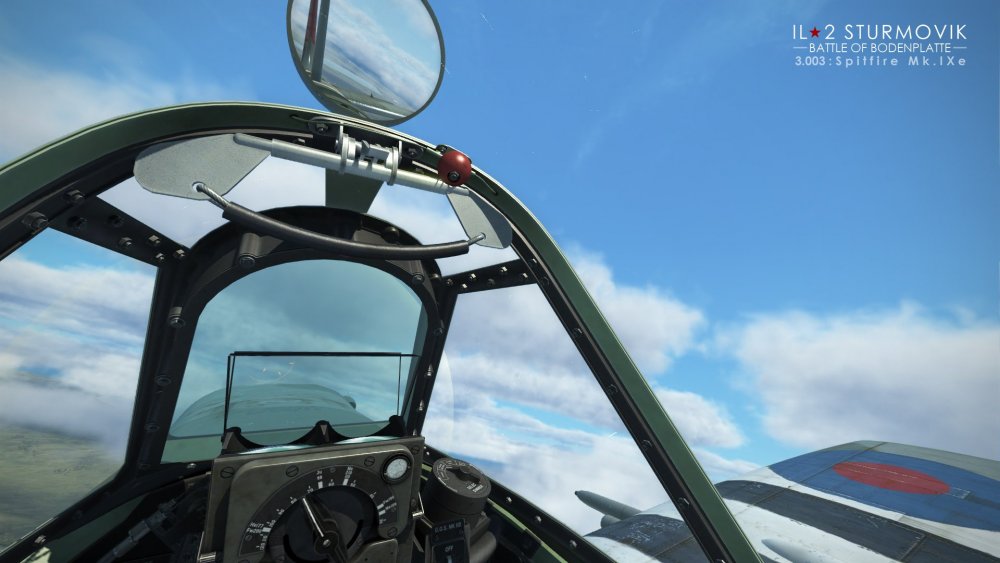 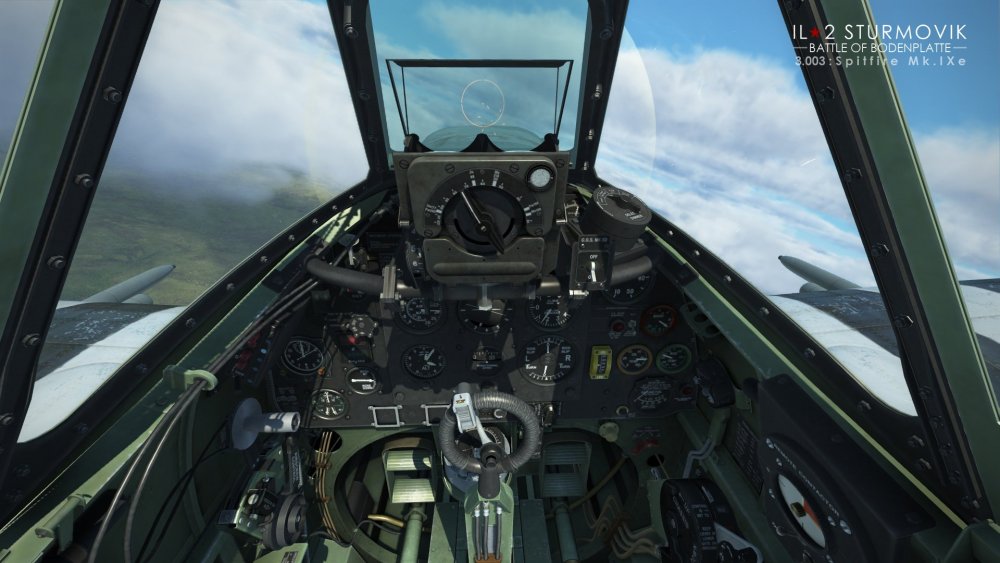 Our new Engineer-Programmer Kirill Konnov describes how the gyro gunsight works in detail:

The gyro gunsight is an advanced device capable of automatically calculating and correcting the lead angle for firing at a moving target. The attempts of building such a device begun even before the war in Great Britain and Germany, but first gyro gunsights appeared only in 1941.

The pilot set the distance to target himself, therefore the simple optical rangefinder was part of the gunsight - adjusting the distance knob changed the size of the moving circular reticle. If the target base (its wingspan) is set correctly using another knob, then adjusting the circular reticle to be the same size as the visible (angular) target size effectively sets the target distance.

But how to calculate the correct angular target lead using these values? There were no computers in the modern sense of this word at that time, so a really complex optomechanical system has been invented. It included the round mirror attached to the gyroscope with three degrees of freedom. 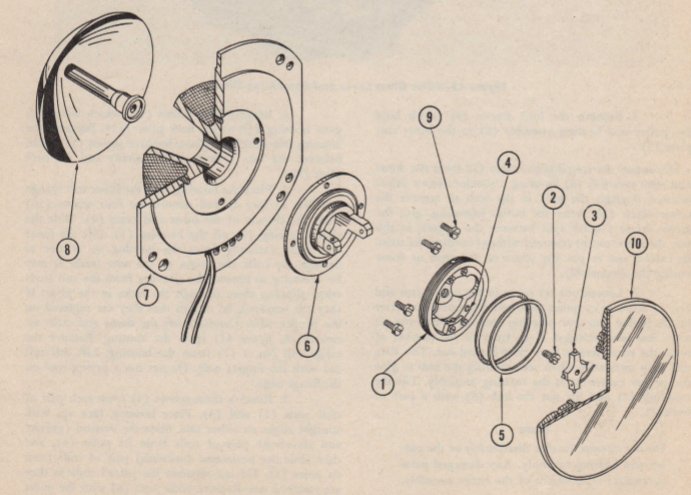 The rotor of the gyro has been rotating in the magnetic field created by inductance coils (Picture 2). The current in the coils has been adjusted according to the set target distance so the resulting deviation from the aircraft axial line during a banking turn projected the targeting reticle to a correct lead angle. 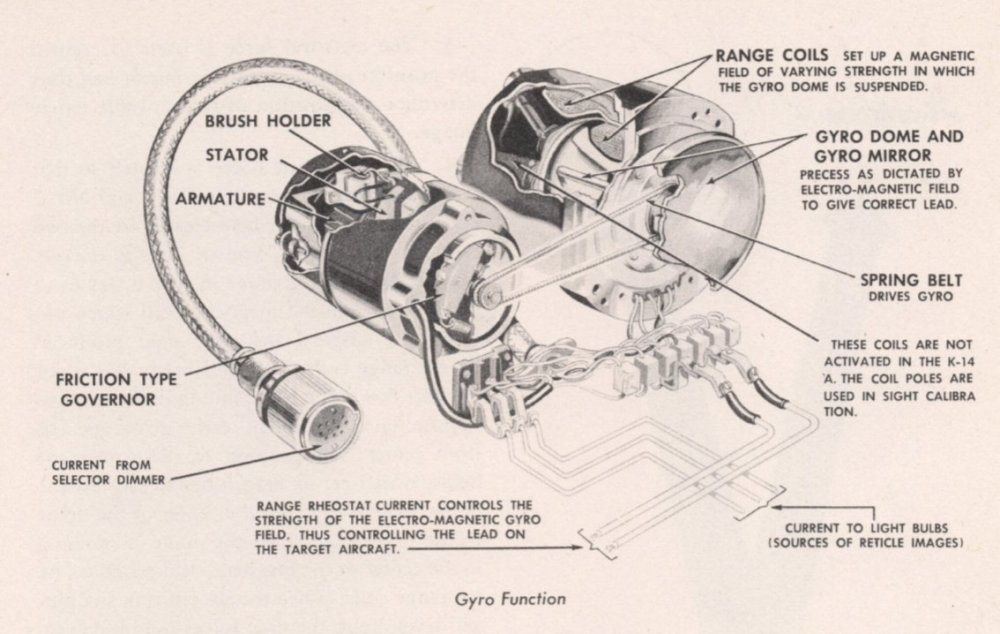 There were four operating modes: fixed reticle, gyro and fixed reticles, gyro reticle and night mode. In the night mode, the target lead is calculated for the fixed distance of 150 yards, ignoring the distance input from the user (but the optical rangefinder in this mode is still functional).

According to the historical data, an average hit accuracy with this gyro gunsight G.G.S. Mk. IID was more than two times better than with regular collimator gunsights on the same aircraft. The main principles used in this gunsight were used in the development of new gunsights and targeting equipment all the way to 1970s.

Having analyzed the level of complexity and unpredictability of the internal processes of this device (many parts of the gunsight are actually crosslinked and serve more than one purpose) I have decided to model the entire system 'as is' without significant simplifications. Therefore, the behavior of the lead indicator in the sim is close to the real gunsight as it is possible.

1. Bf 109 G-14 is available to all Battle of Bodenplatte owners;
2. Spitfire Mk.IXe is available to all Battle of Bodenplatte owners;
3. Finishing a mission no longer results in an incorrect results screen while using automatic login via autoplay.cfg file;
4. Multiplayer server ban time control has been fixed;
5. The random black screen issue while joining a multiplayer server should be gone now;
6. The multiplayer modifications blocking logic has been corrected;
7. Two units that were AI-only are joinable now: 15.(span)/JG 27 (BOM) and 13.(slow.)/JG 52 (BOK). In addition, two new pilot biographies were added. Big thanks to the community enthusiasts who wrote the texts!
8. Vehicles in a column shouldn't crash into a destroyed vehicle (QMB and Career modes);
9. Player home airfield won't have an empty callsign anymore (Career);
10. The Career mission generator won't fail when there are too few aircraft left in a unit;
11. Many text corrections in the Career mode;
12. The issue in the Career mode when a pilot transferred to another unit still flew for his former unit has been fixed;
13. All single missions should display correctly in the mission list;
14. Default map zoom in has been corrected both in briefing and in flight;
15. Gunsight settings (set distance, etc.) won't reset anymore when a new enemy aircraft is spawned;
16. Tank handling (turning) at higher speeds has been improved;
17. Wrong world scale in Windows Mixed Reality devices such as Samsung Odyssey caused by the doubled reported IPD value should be fixed now.