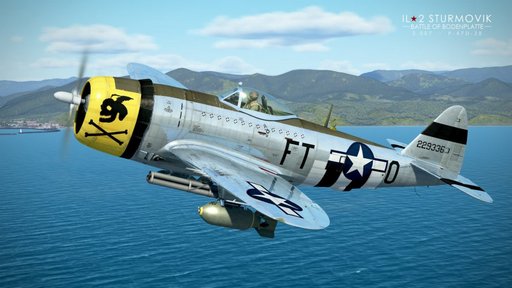 We just published another IL-2 Sturmovik update - 3.007. In this update, we release 4 new aircraft: P-47D-28 and Bf 109 K-4 for Bodenplatte and Sopwith Camel and Pfalz D.IIIa for Flying Circus. But of course, these planes aren't the only addition - the two months weren't spent in vain and we have added numerous improvements to the sim.

First, as announced before, we're adding new mission types to the Career mode. Second, there are many fixes that should make the multiplayer experience smoother. Third, important changes in the game stats adjust the kill registering logic. Fourth, the damage modeling of simple AI controlled vehicles is much more detailed now. Fifth, FM now takes into account the compressibility of the air at high speeds - this complex modeling was required for late war aircraft, but it works for any plane in our sim. Sixth, pilot AI has been improved. There are other numerous changes in graphics, user interface, physics and aircraft systems, etc.

Some words on new airplanes physics feature presented in this new update:

Our physics engine now includes the aerodynamic effect of air compressibility at high Mach numbers. Our lead engineer has done the hard work of adding this phenomenon to the simulation so we take another step forward in our physics engine. As it is well known when an aircraft’s speed approaches the speed of sound, many aerodynamic characteristics change; the drag increases a lot, the lift changes in a complicated way, the center of pressure and the aerodynamic center moves backward. All of these factors affect the maneuverability, the stability and controllability of the aircraft. When this happens the available G-load factor goes down, the turn rate decreases while the radius of the trajectory does up and when pulling hard the airplane enters a stall earlier. Some airplanes have a tendency to become unrecoverable while in a dive at extremely high speed. As we plan to have high-speed piston and jet airplanes in Bodenplatte we could not ignore this aerodynamic effect. However, all airplanes in the Great Battles series now has this feature. So, dogfighting at high altitude and high speed is getting another step closer to reality.

Multiplayer changes
14. Engine sounds of other players planes won't randomly disappear;
15. Gunfire sounds of other players planes won't randomly disappear;
16. Net traffic generated by multiplayer clients has been optimized, which should improve the performance of multiplayer servers;
17. Other players position prediction routine has been optimized, resulting in a smoother multiplayer experience;
18. The delay between a player pushing the fire button and other players actually seeing his aircraft fire has been minimized to the best possible extent;
19. Other players gun convergence displayed correctly;
20. APHE and HEAT rounds fired by other players won't generate a double sound effect;
21. Server ping values appear correctly in the server list;
22. The coalition flag in the game world switches correctly;
23. Binary mission logs are now saved correctly (needed for mission stats debugging);
24. An exploit linked to navigation markers on the fullscreen map has been fixed;
25. Right Ju-52 engine animation fixed;
26. AA searchlights function correctly in multiplayer;

Visual changes
27. FPS in forest areas with lots of trees visible has been improved a lot thanks to the tree rendering optimization;
28. Aerobatics smoke effect has been improved;
29. Wrong 'black debris' effect issue while hitting enemy planes has been addressed;
30. Distant forests won't appear too white in morning or evening fog;
31. Water drops now appear on the pilot goggles in VR;
32. Dripping water on windshield have been removed during winter (unrealistic);
33. Oil drops from the damaged engine will appear on the pilot goggles only if he peeks out around the windshield;
34. Engine start effect has been improved;
35. Flying Circus aircraft now has the new fire and leak effects like the rest;
36. Mission designers can place colored smoke signals in custom missions;
37. Too subtle sun glare effect has been improved on the Moscow winter map;

GUI changes
38. Tank Crew commands now have their own input settings section;
39. Starting altitude shouldn't reset in QMB;
40. Wrong aircraft type issue in QMB has been fixed;
41. Air turbulence and wind direction randomness work correctly in QMB;
42. Wind direction randomness near the ground works correctly in QMB;
43. Precipitations during bad weather work correctly in QMB once again;
44. Mission track records will be named correctly;
45. Mouse pointer won't disappear after opening Settings menu while replaying a track record;
46. GUI shouldn't flash after alt-tabbing anymore;
47. With Imperial units selected in settings, the atmospheric pressure is indicated in mm Hg in Career missions forecast;
48. Speed tooltip appears correctly while hovering the mouse cursor over a waypoint;
49. Career interface won't glitch after exiting a Career briefing using the top navigation buttons;
50. Chat messages delay in singleplayer has been corrected;
51. A possible crash bug tied to changing settings during a mission has been fixed;
52. Technochat has been optimized, making the game smoother in many situations;
53. Technochat tips have been moved to the main chat area;

FM and instruments changes
54. Engine oil in case of a leak or engine failure won't be splattered on the windshield or pilot goggles for P-39;
55. Aircraft fuel tanks may detonate (the probability depends on the amount of fuel left);
56. Fuel tank explosion correctly nullifies the fuel reserve;
57. You need a greater sideslip motion to put off the fire on Flying Circus aircraft;
58. Collimator reticles look better;
59. Revi 16B sight reticle made more authentic (Bf 109 G-14 and Fw 190 A-8;
60. In addition to critical aircraft damage or loss of controls on one axis (lateral or longitudinal) the tip suggesting to bail out will appear in the following additional cases:
- no fuel left,
- engine damage makes a horizontal flight impossible,
- fire on board;
61. Artificial engine assistant now uses different mixture control lever positions:
- He-111 H6/H16: decreased from 10 to 5 positions,
- Hs-129 B2: increased from 4 to 5 positions,
- Spitfire Mk.VB: decreased from 3 to 2 positions,
- Spitfire Mk.IXe: decreased from 4 to 2 positions;
62. Artificial engine assistant now uses less different cowl flaps positions on Fw-190 A5 and А8 (3 instead of 5, like on other aircraft);
63. Radio direction finders corrected for all aircraft (inverted);
64. An error in aerodynamic momentum calculations while pushing the Bf-109 G14 rudder to the left has been corrected;
65. Spitfire Mk.VB and Mk.IXe coolant boiling temperature increased from 115°С to 140°С (MSL) and for MiG-3 increased from 115°С to 120°С (MSL);
66. Different mixture error that appeared while controlling Bf-110 G2 left and right engine throttles separately and that caused the power difference between them has been fixed;
67. Bailing out tip added for Fokker Dr.1;
68. Indication errors corrected in Fokker Dr.I fuel and speed gauges;
69. Fokker Dr.I and SPAD 13.C1 descriptions corrected;
70. Bomb lever delay fixed on SPAD 13.C1;
71. The default amount of fuel in GUI corrected for different aircraft;
72. All FLying Circus airplanes ground collision made more detailed;
73. Fokker Dr.I and SPAD 13.C1 visual damage appearance corrected;
74. SPAD 13.C1: erroneous speed, water temperature and fuel tank pressure readings corrected;
75. SPAD 13.C1: upper wing fuel tank leak and fire effects added;
76. SPAD 13.C1: bombs can be dropped only one after another;
77. Oil leak effect added to all Flying Circus planes; 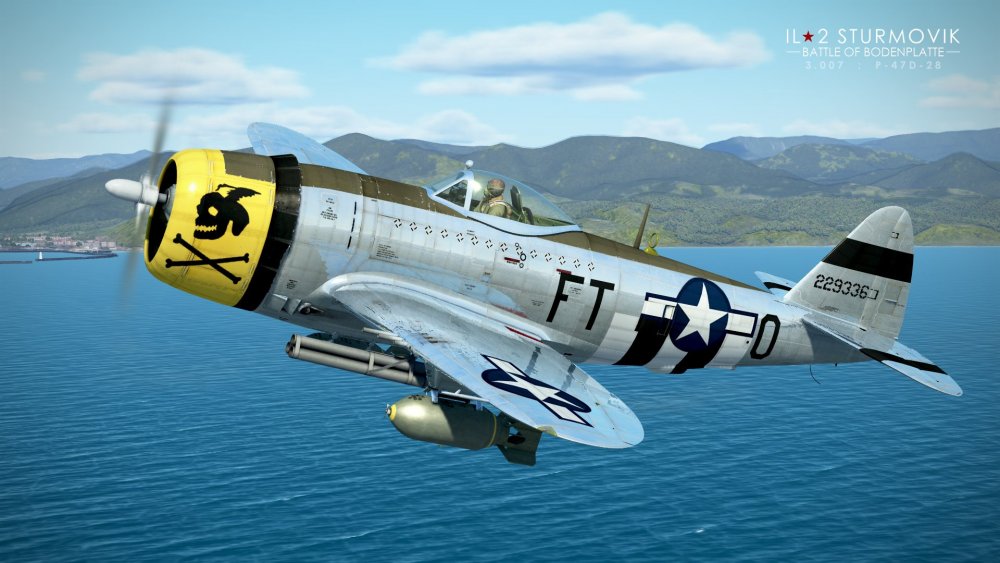 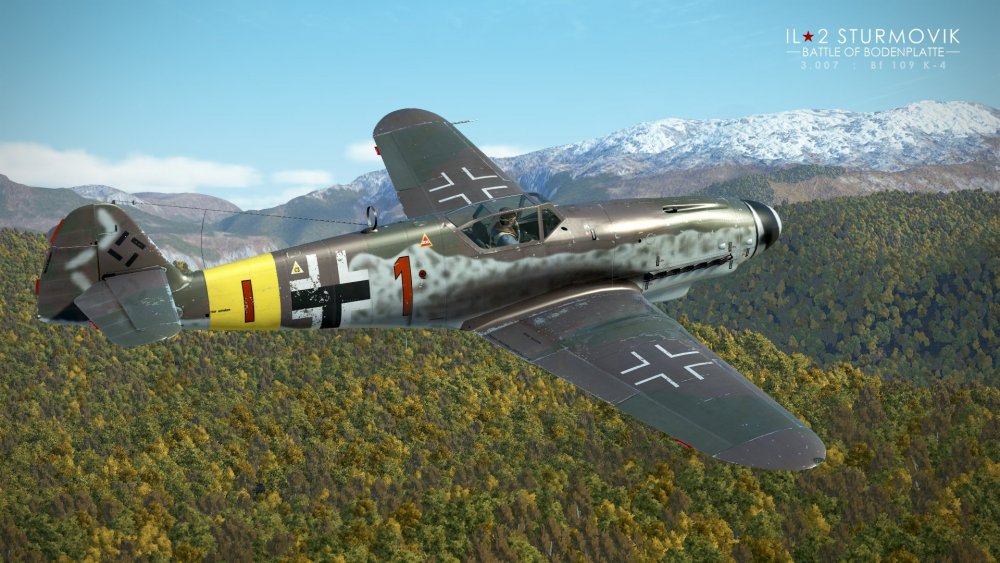 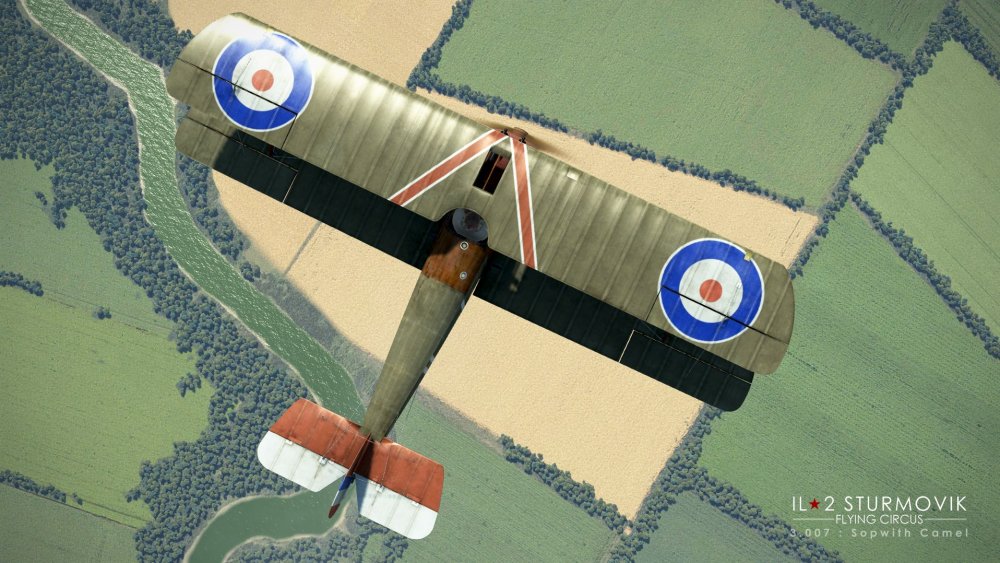 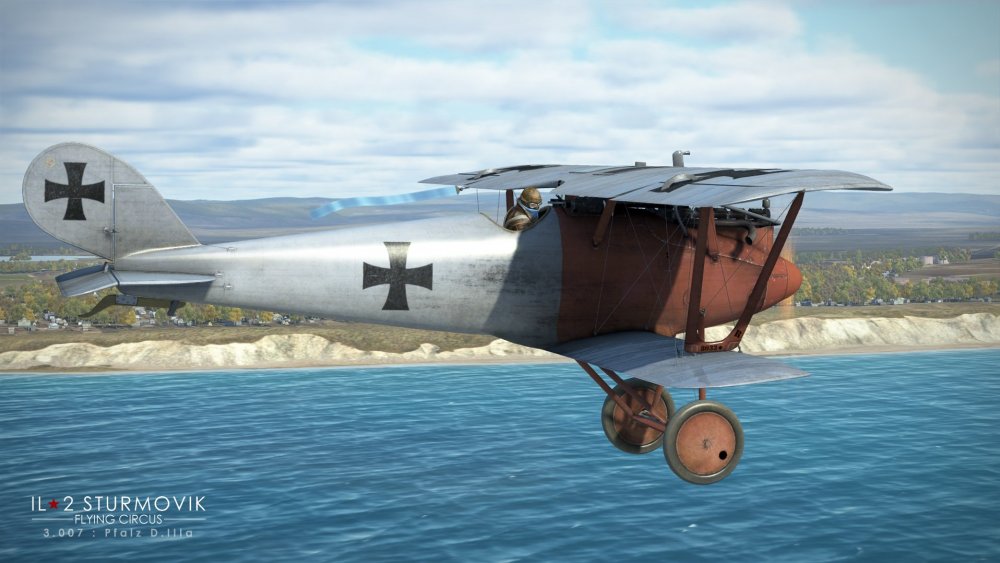 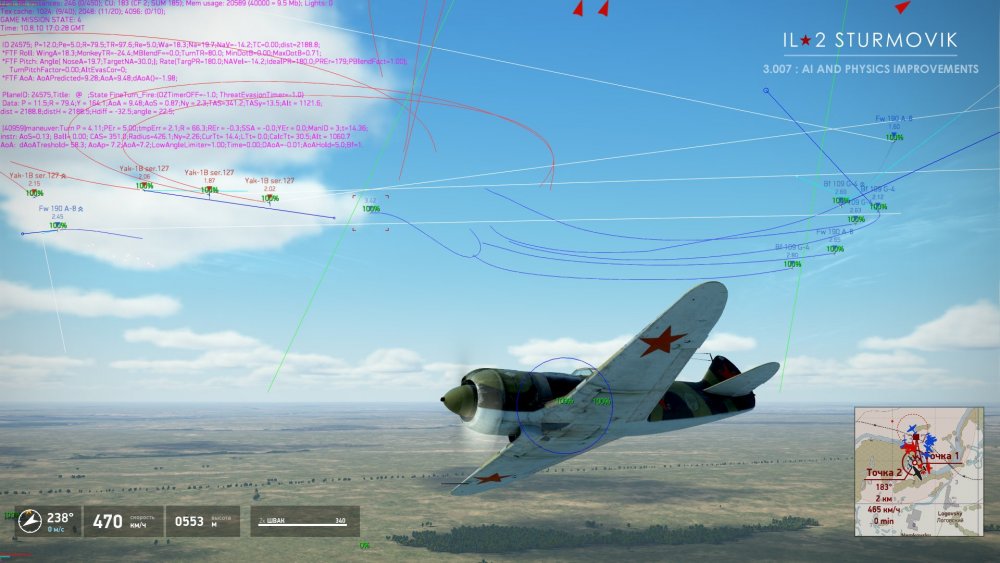 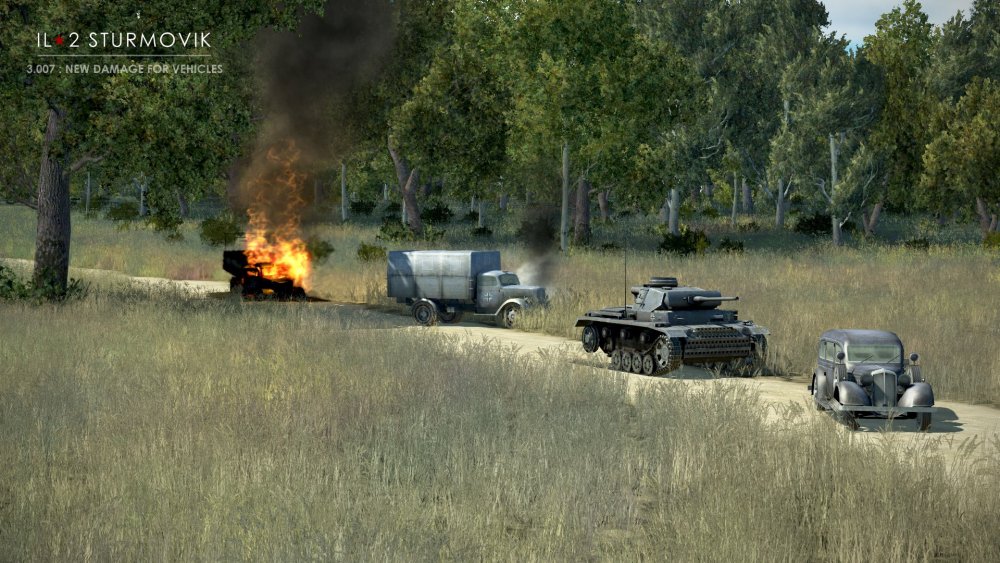 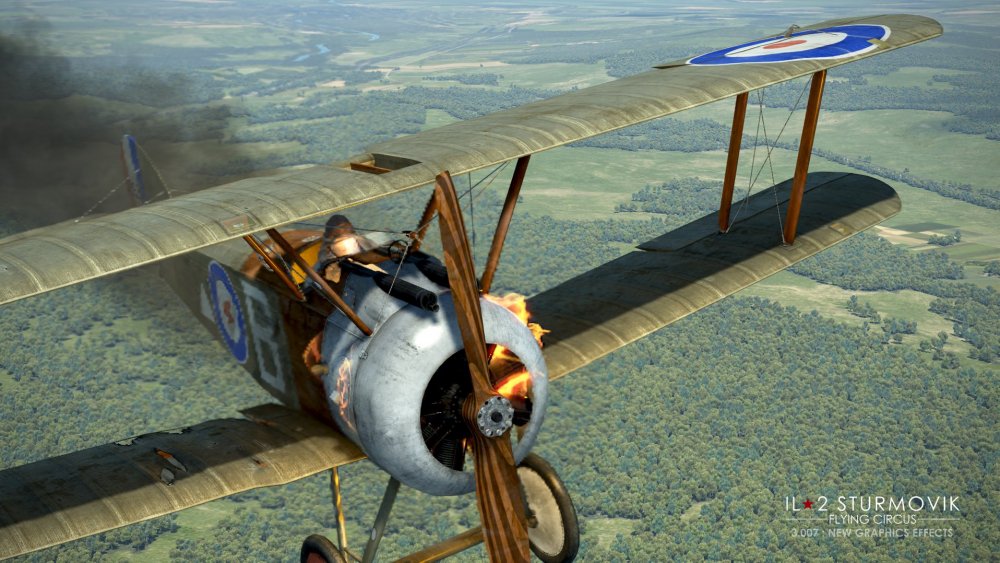 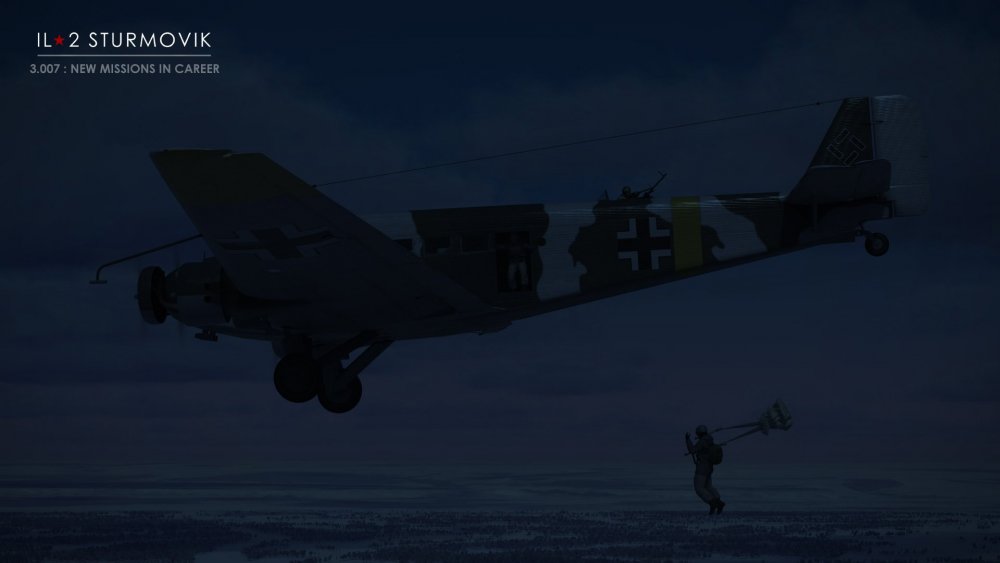