First of all, a couple of words about the recent 17th session of Early Access. Thanks a lot once again to everyone for taking part in that very first test of multiplayer over a wide audience. The test was successful, data was gathered, conclusions were made and new goals appointed. We’ve been keeping an eye on the entire test and we’re fully aware how smooth it was (or was not) for all of you. Technical issues are being cared for, and you know, it’s great for the whole team to work knowing that the servers were full on the day one of the MP test. Which is an optimistic event, isn’t it?

The past week hasn’t brought any changes to the early access version, and you’re going to have the same one for at least one more week. We need to fix the known bugs first and get ourselves onto some new ones second. About the Yak-1 in multiplayer - well wait until the Bf 109 G-2 enters the scene, since we’ve settled a tradition to release planes in pairs. LOFT and ZAK are ready to answer your questions about the upcoming plans for IL2BOS next week in a new official live stream. Next Wednesday you’ll see Pe-2 in its grace and hear some of our comments about this first bomber in the game.

And this time we give you the Quick Mission Builder for Early Access. Now it is time for you to build your own gameplay: you may start exploring faraway corners of the map, or try any time of the day, or play a combat scenario you want most. We hope you’ll find its interface easy enough to use.

Read the full dev blog and discuss it on the forum 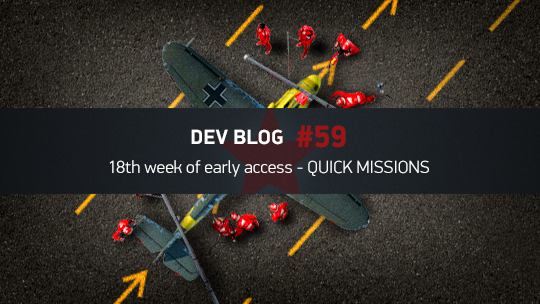