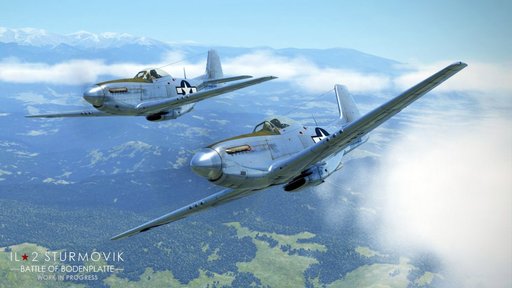 As you know, to work well one needs to have a good rest. While the summer season continues, and our colleagues go on vacation, I will tell you how important it is for a military pilot to be able to save and properly spend his strength during combat.

Probably you have already realized that in today's diary I want to talk about our new pilot physiology modeling, which we are preparing for the release in the next update. Our Beta testers will receive this model for tests today.

The focus of the new physiology model is, above all, on a more realistic imitation of a person's tolerance to high G-load. Although this is not the only change in the pilot physiology, you will most likely notice it first, so let's talk about it in more detail.

As you know, we all are different, and each of us has different stamina, physical strength, and ability to resist negative environmental factors. Therefore, the ability of a particular pilot to withstand high G-load is, of course, purely individual, and depends on a good number of factors: age, state of health, fitness, whether a pilot slept well the night before, how much he ate and how long ago, and even what his emotional state is. Of course, we cannot collect all this information about you, and take all these factors into account in such detail; such a model would be excessively complex, although it would probably allow the player’s best immersion into virtual reality. Nevertheless, we found that the most reasonable approach would be to choose a certain averaged model of an average pilot physiology. By "average pilot" we mean a trained pilot in good physical condition, who often performs aerobatics. A large number of different medical studies with the collected statistics of experiments with pilots and volunteers come to our aid. Based on them it is possible to establish a “middle way” of the typical human tolerance to high G-load.

The first thing that all researchers pay attention to is the fact that the amount of G, both positive (when a pilot is “pressed” into his seat) and negative (when a pilot is “pulled away” from his seat and “hangs on the belts”) depends primarily on the duration of the G-load and on the rate the G-load was applied. For example, at a positive +6G the “average” pilot loses consciousness within the first 5-8 seconds, but the same pilot quite successfully sustains +5G for about 40 seconds, if the rate of G-load application was less than 1G/sec. However, if you create the same +5G in just 1-2 seconds, then loss of consciousness will occur in 5-7 seconds. In aviation medicine, this phenomenon is explained by the “hemodynamics” of the cardiovascular system. The body needs some time to mobilize and begin to effectively counteract overload. This is illustrated in the chart from the article written by Anne M. Stoll, “Human tolerance to positive G as determined by the physiological end points” published in The Journal of aviation medicine in 1956: 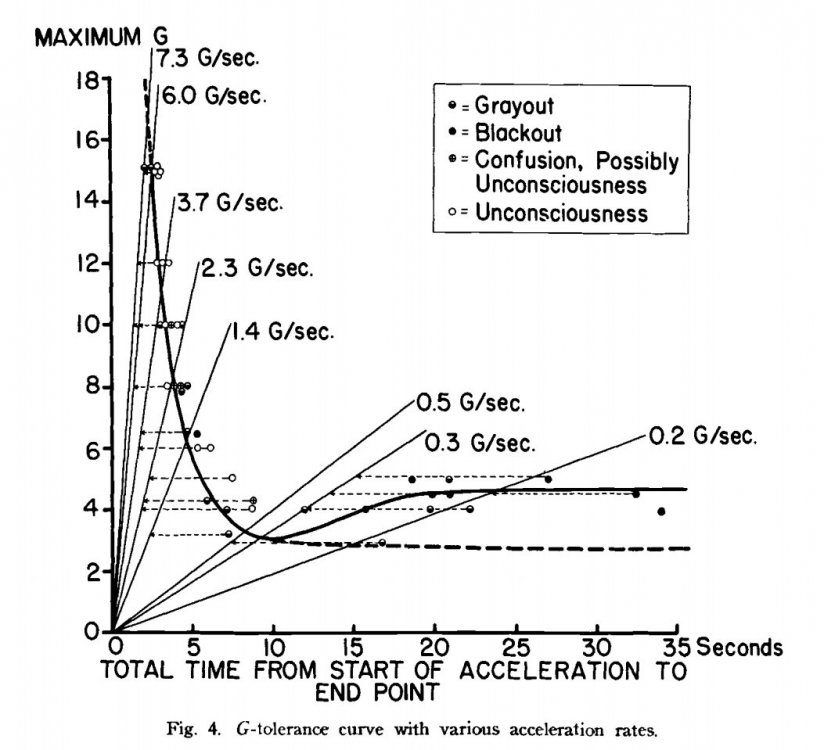 In our new model of human physiology, all these factors are now taken into account. If a high G-load is applied within 1-2 seconds, the negative consequences (visual and hearing disorders) do not appear immediately, but rather with a 2-3 seconds delay, then a quick “crisis” follows, and then, after a few seconds, the body mobilizes and its ability to tolerate G-loads becomes better. This “crisis” can be avoided, or at least reduced, if you pilot more smoothly and create G-load gradually and slowly.

Here is another graph that shows how long an average pilot is able to withstand positive and negative G until he loses his consciousness. The blue line is a summary of data we collected as a result of our various medical studies analysis. Red dots are the results our new model shows: 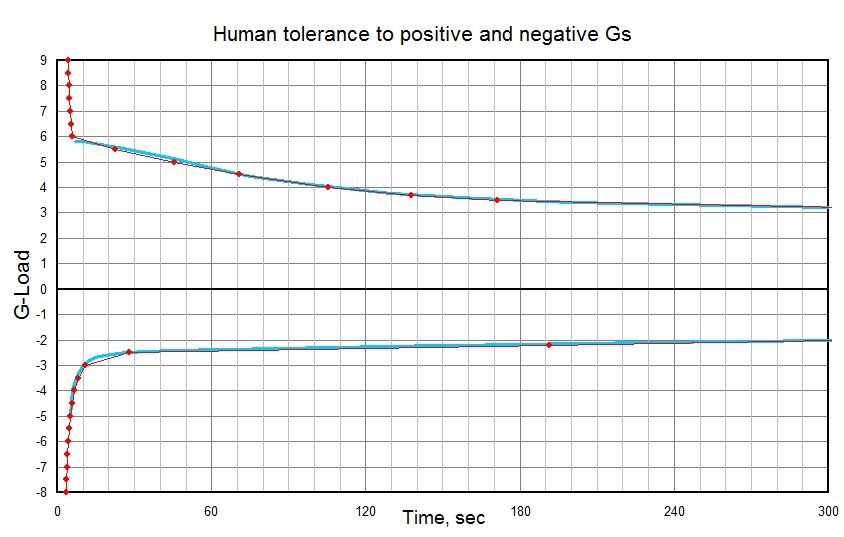 As you can see, pilots tolerate the positive g-loads much better than the negative ones.

In addition, now we also take the pilot’s fatigue factor into account, based on the data mentioned above. This means that every pilot’s maneuver performed with a large g-load is no longer in vain, and the more actively a pilot maneuvers, the worse he and his crew will suffer further g-loads. If the pilot is already pretty worn out by maneuvering combat, be aware that a new opponent who entered the battle will have a significant advantage, and maybe you should get out of the dogfight and catch your breath. This may take you a few minutes.

Another important part of this work is the reconfiguration of the visual effects of visual impairment. We brought it into a full compliance with the sequence described in the scientific literature. First, under the influence of positive g-load, a pilot begins to lose color perception (a so-called “grayout”). Then his peripheral vision field (or a “tunnel vision”) narrows, until it becomes completely dark in the eyes (a so-called “blackout”). The visual impairment is also accompanied by hearing loss. On a negative g-load, the effect of “tunnel vision” and loss of color perception do not happen, because, unlike a positive overload, there is no oxygen starvation of the optic nerve. But on the other hand, the pilot feels a rush of blood to his head, which is expressed in the appearance of a noticeable red tint of vision (a so-called “redout”), and the sharpness of vision also deteriorates.

I have mentioned a “loss of consciousness” several times already. Yes, now we are simulating this state, too. A pilot can lose consciousness at large positive or negative g-loads if the threshold of their physiological tolerance is exceeded (taking into account the duration of g-loads, the pace of their creation and accumulated fatigue). A harbinger of the loss of consciousness at the positive g-load is a blackout, although even having completely lost his eyesight, the pilot is still able to control his aircraft for some time. At the negative g-load loss of consciousness occurs more unexpectedly, and the only way to determine it in time is by a sharp deterioration in visual acuity. Studies have established that, depending on a number of factors, a usual period of a G-lock can be as long as 10 to 15 seconds, and during this time the aircraft will remain uncontrollable. Keep in mind that each subsequent loss of consciousness will cost you even greater loss of time and energy. WWII fighter pilots were very human, not Superman and they did experience pretty high G-loads even in piston planes.

In conclusion, I would like to mention that we also limited the pilot’s ability to bail out at the airspeed of more than 400 km/h, or under the influence of positive g-load of more than +3G (which is the physiological limit in terms of the ability of a person to get out of the seat). These numbers refer to a healthy pilot; in case of injury getting out of the cockpit will be even more difficult for a crew.

The effect of hypoxia model on g-load tolerance model has also been refined and will take air pressure into account more correctly.

Preparing for the release of a new physiology model, we understand that for some players it incomprehensible and not obvious at first. Therefore, we left you the opportunity to choose a simplified physiology model in the realism settings, which will work quite similar to the current model, and will not take into account the pilot’s fatigue, the hemodynamics of his cardiovascular system, or limit the pilot’s endurance according to the duration of g-loads or the pace of their creation. Also, in a simplified model your crew will not be able to lose consciousness. At the same time, this simple model will use the new reconfigured effects of visual and hearing disorders, and the magnitude of the g-load at which these disorders occur will be brought into line with the updated data from the new model.

We really hope that the new model of the pilot’s physiology will make the gameplay more interesting, and significantly change the tactics of dogfight. So, the players will now have to take care of the physical condition of the pilot and be more careful about active maneuvering, and this will take us one step closer to the reality of air combat.

We continue to work on the BOBP map and its large list of airfields and urban areas which is something rather new for us. This map has been a challenge like never before and we have it functioning in Beta, but it has a little way to go still. However, our last three Allied planes are coming along nicely. Check out this beautiful formation of vintage American air power and a bonus shot of the Tempest in flight. The Tempest continues to be tweaked and improved after the first round of Beta testing and the P-38 is also in Beta with small tweaking necessary. The P-51D will also be coming to Beta soon. All three aircraft are quite complex. The different design philosophies of each nation have really become evident as we make more and more planes.

We must remind everyone that these planes are still a Work-In-Progress so some of these details in these images may change. 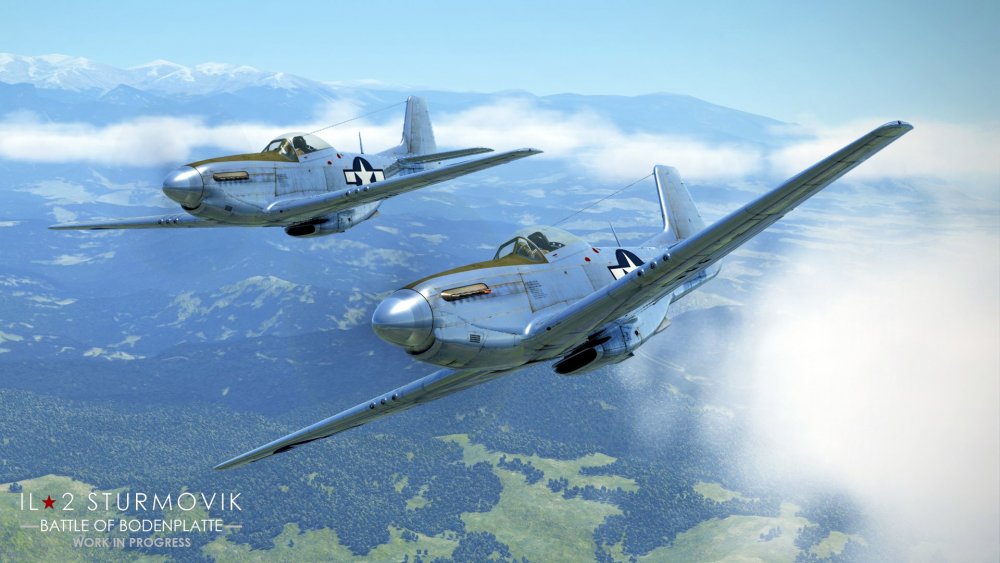 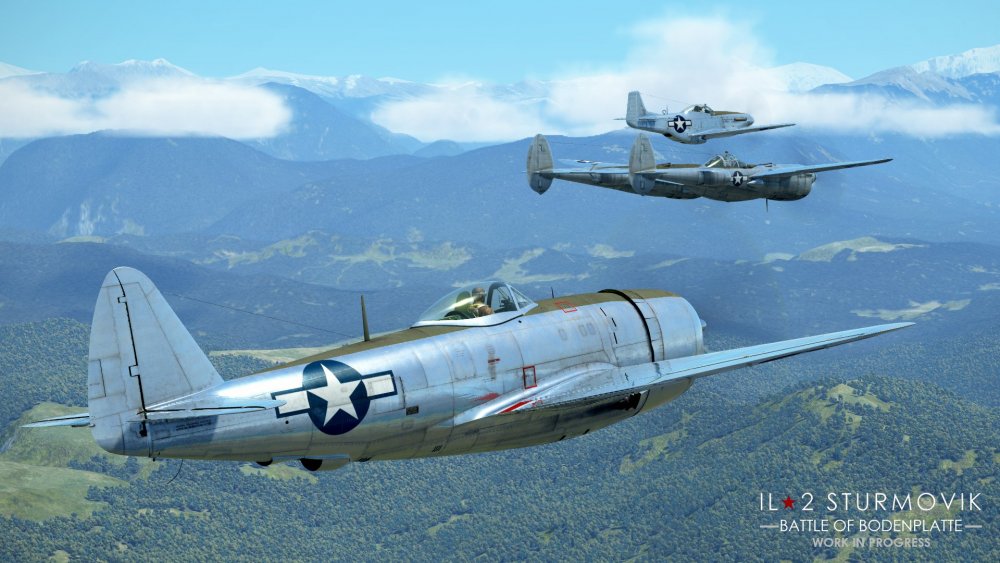 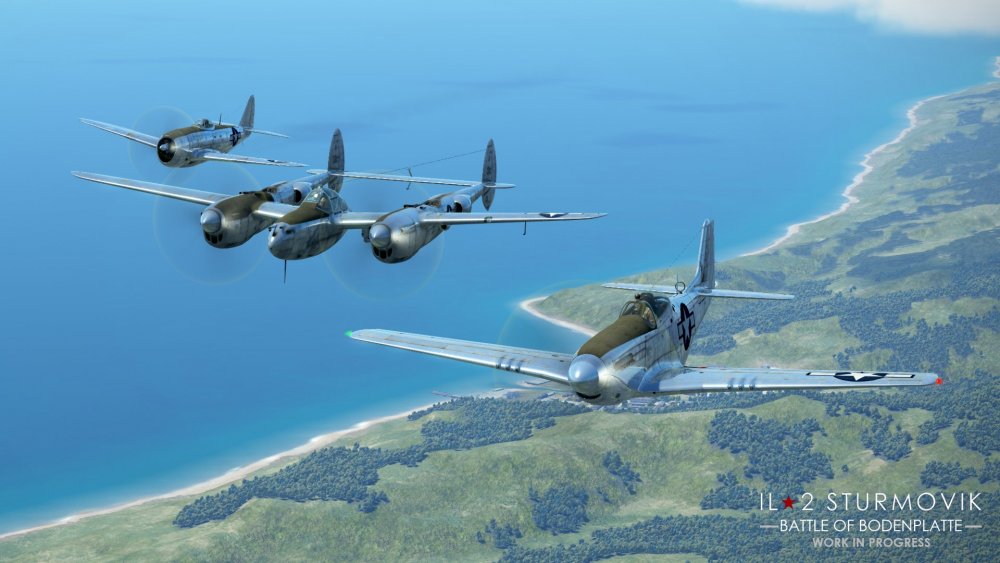 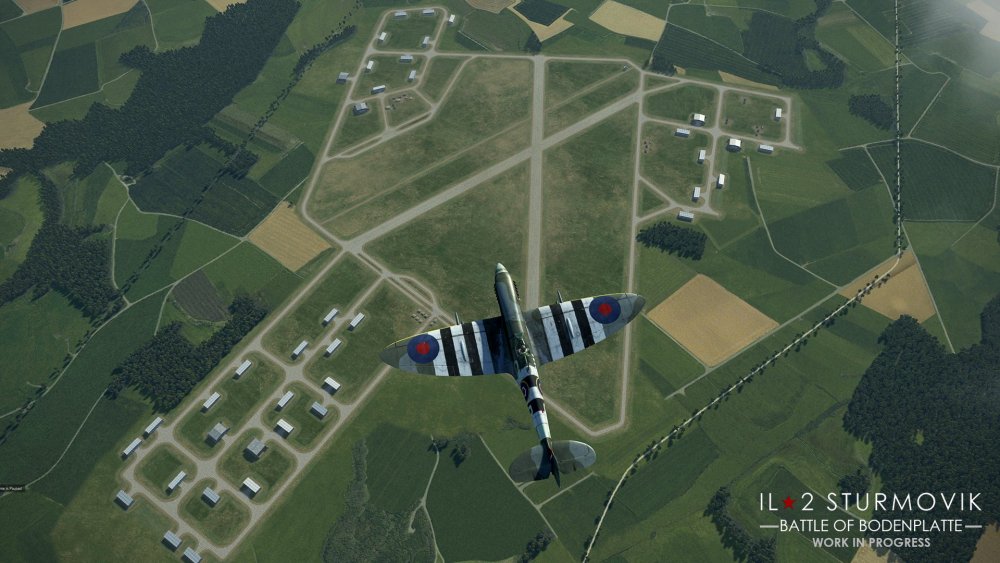 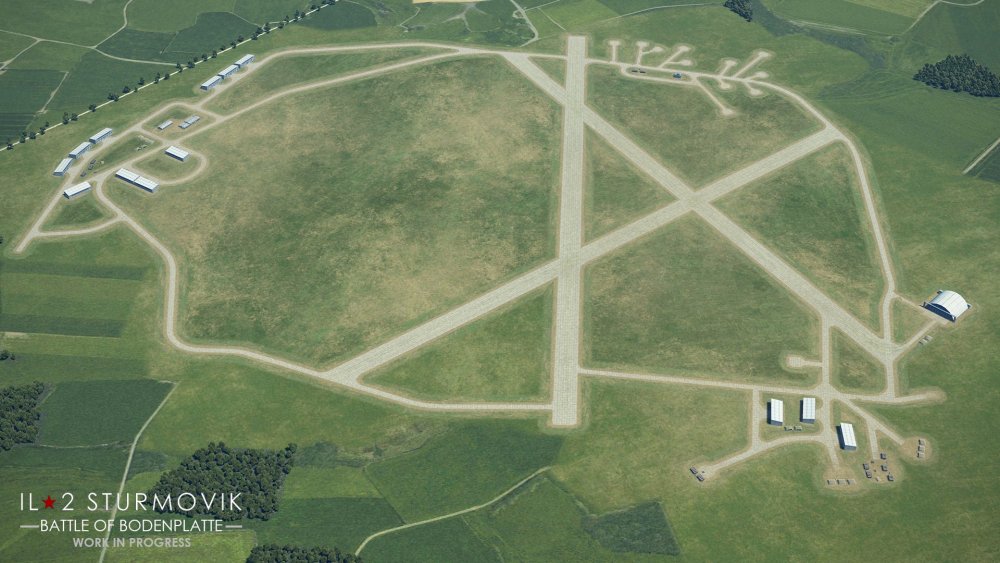 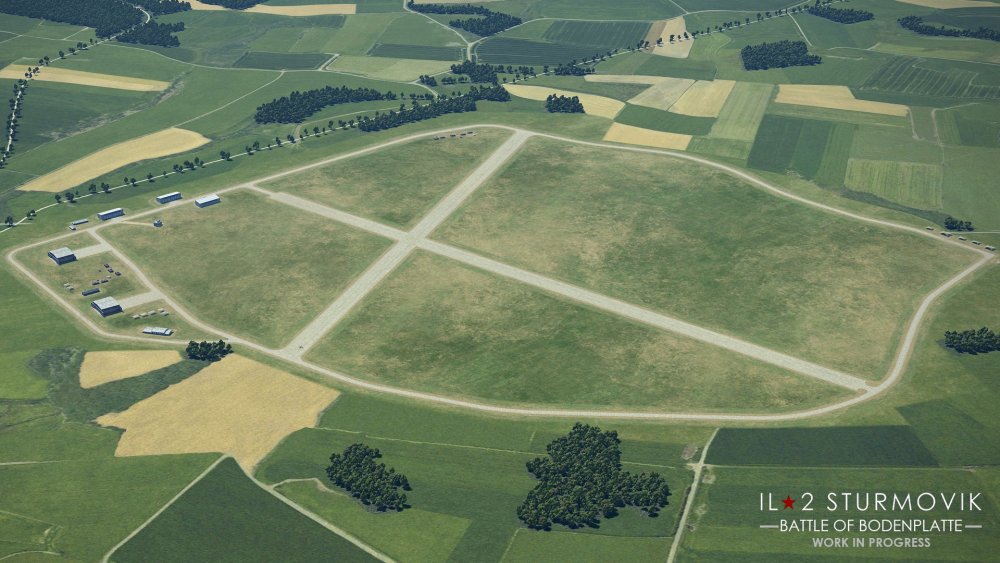 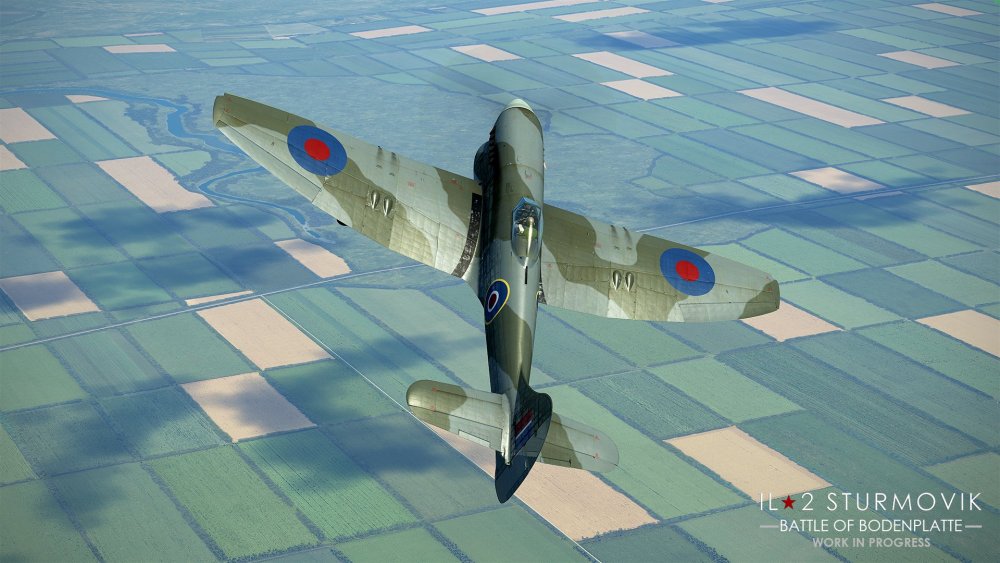 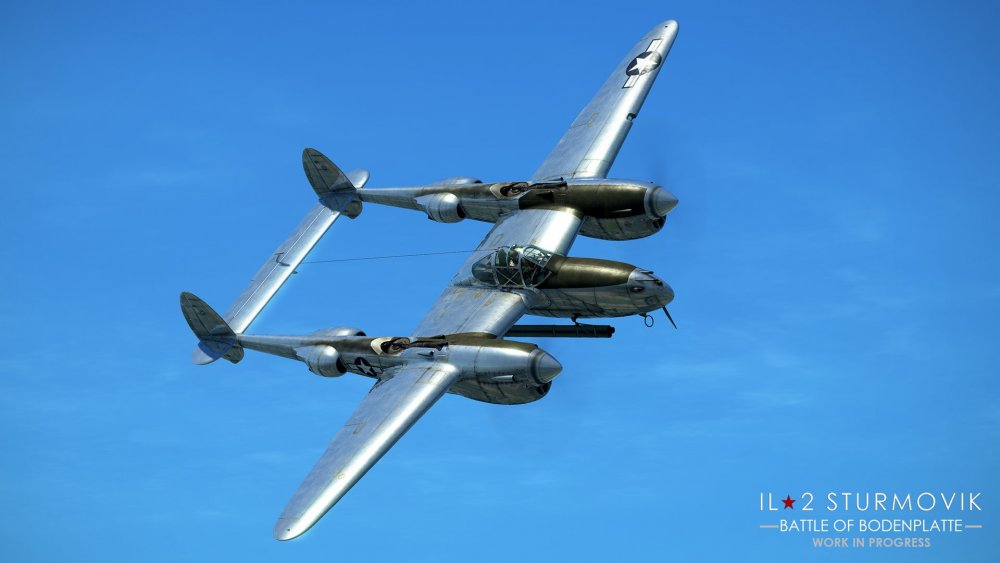 Our P-51D-15 “Pony” is nearing the Beta stage as we finish the cockpit and external model. Here are the first pics of the P-51D cockpit. Our model team has done another awesome job! 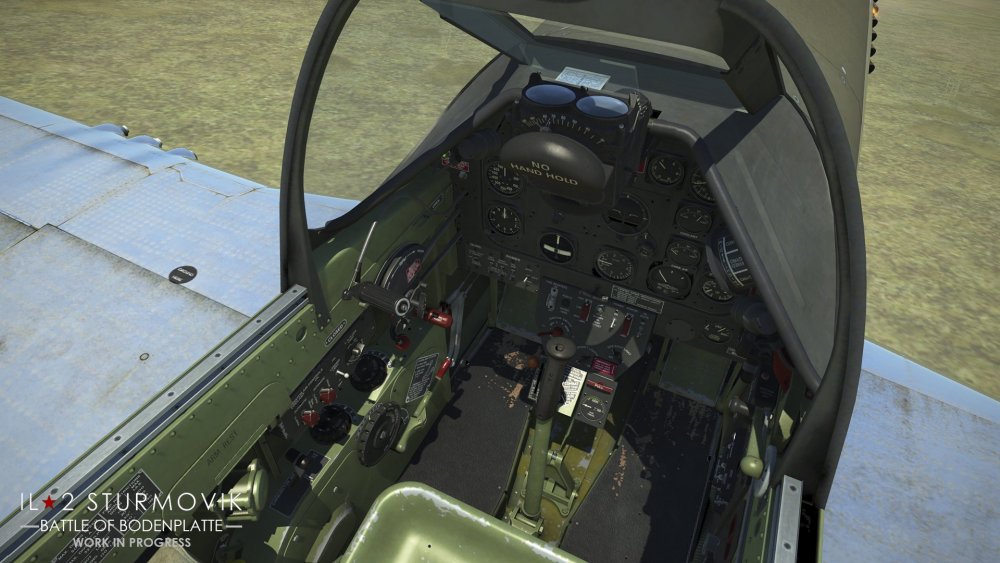 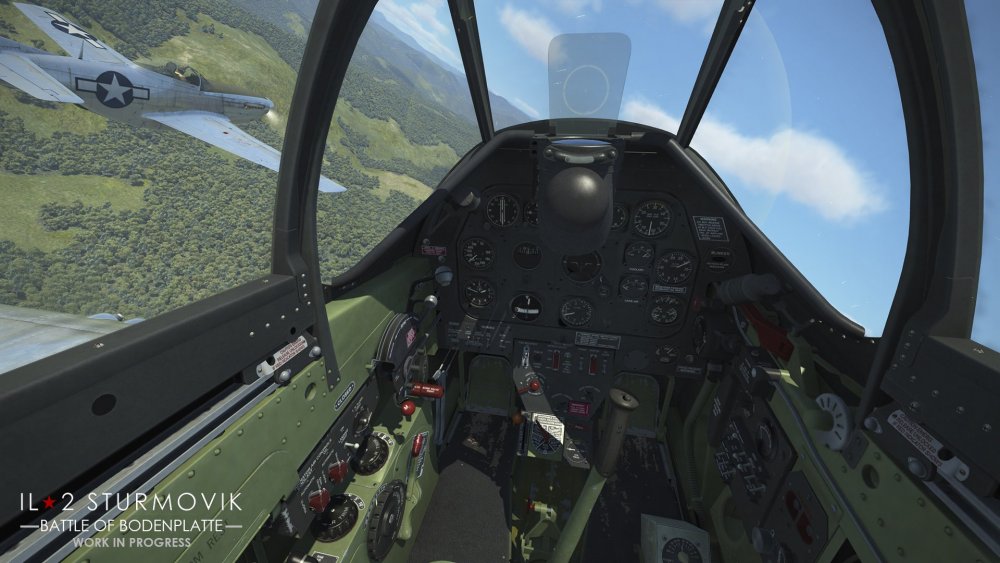 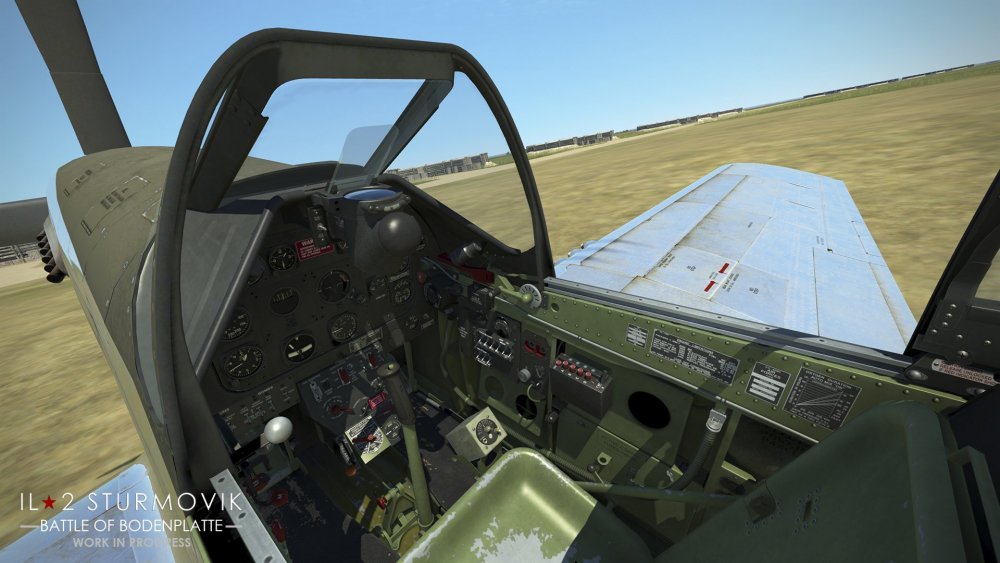 Another popular request has been the ability to place a personal picture in the cockpit of your plane. We have now added this capability. 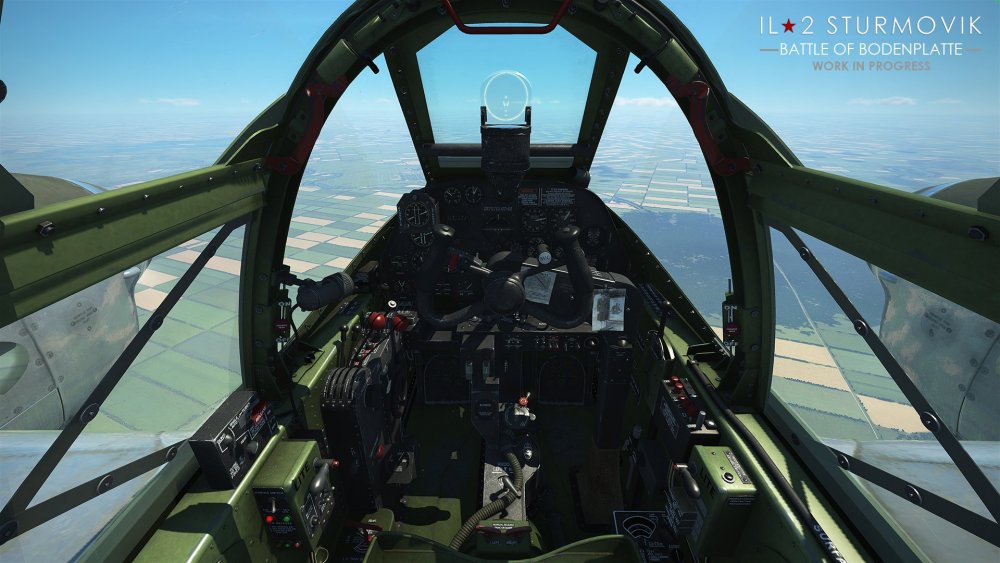 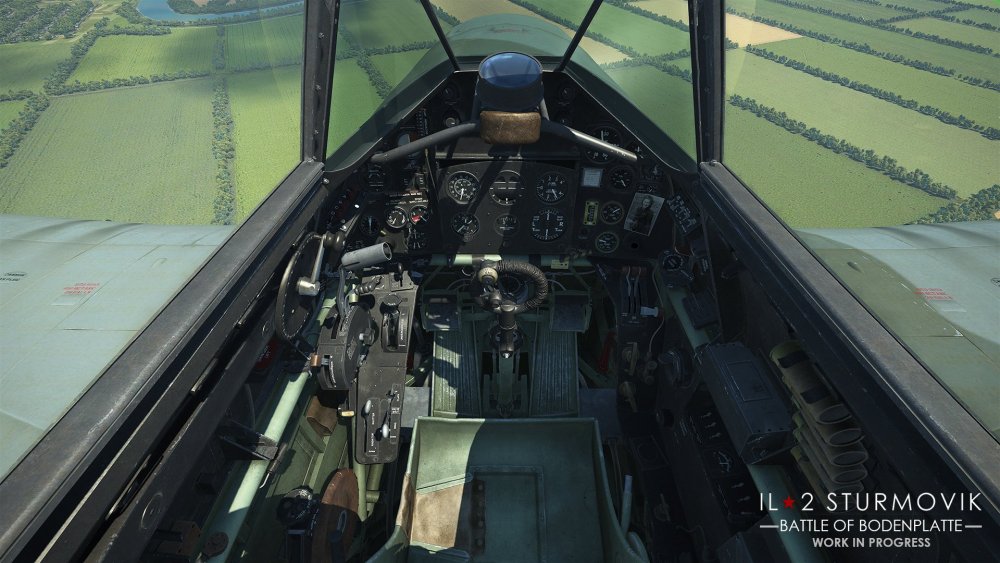 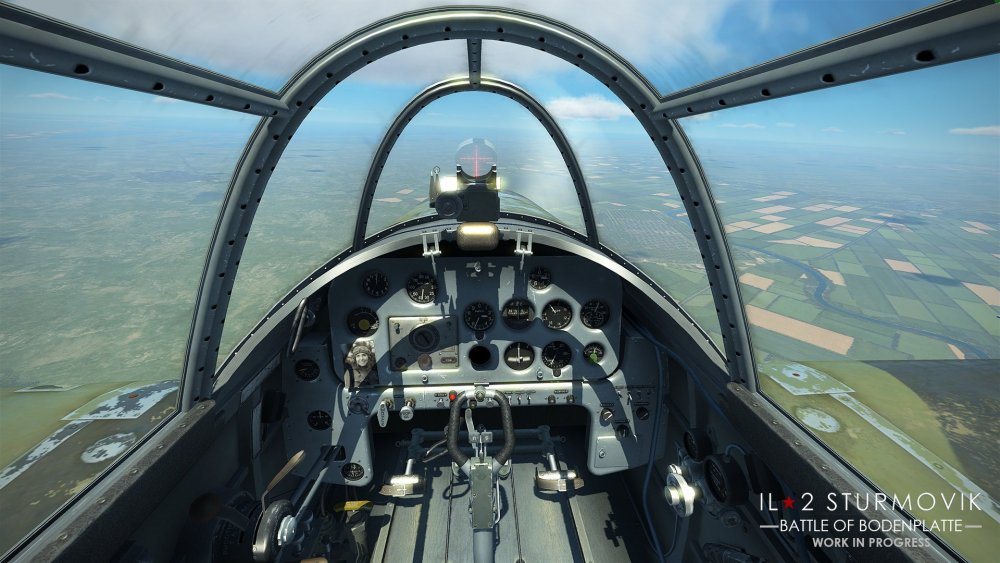 Yes, by popular request, we have increased the visibility of distant airplanes. This has been a difficult technical challenge, but we think Sturmovik pilots will appreciate this new reality. Can you spot the far-off planes? We’re still tweaking the feature, but it’s in testing. 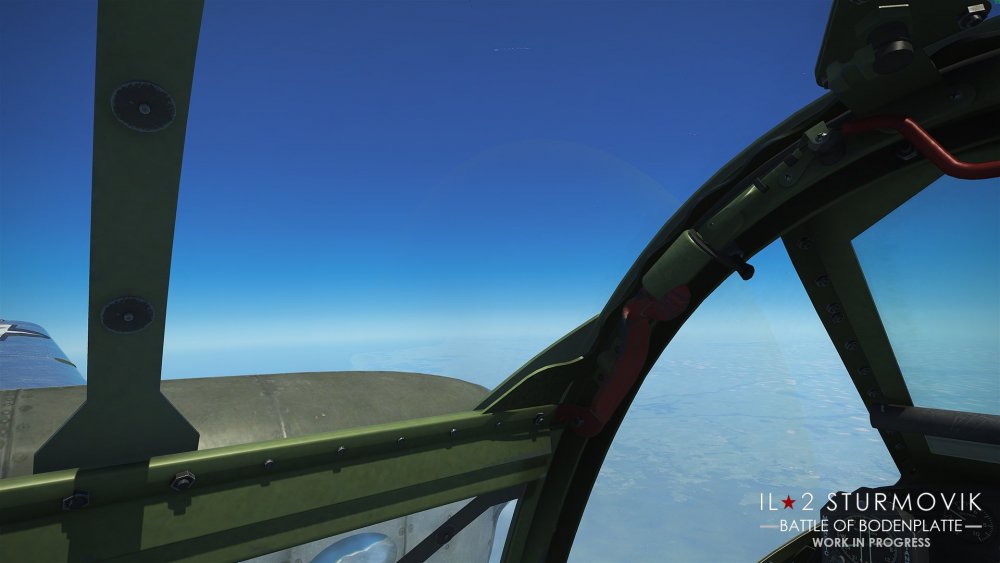 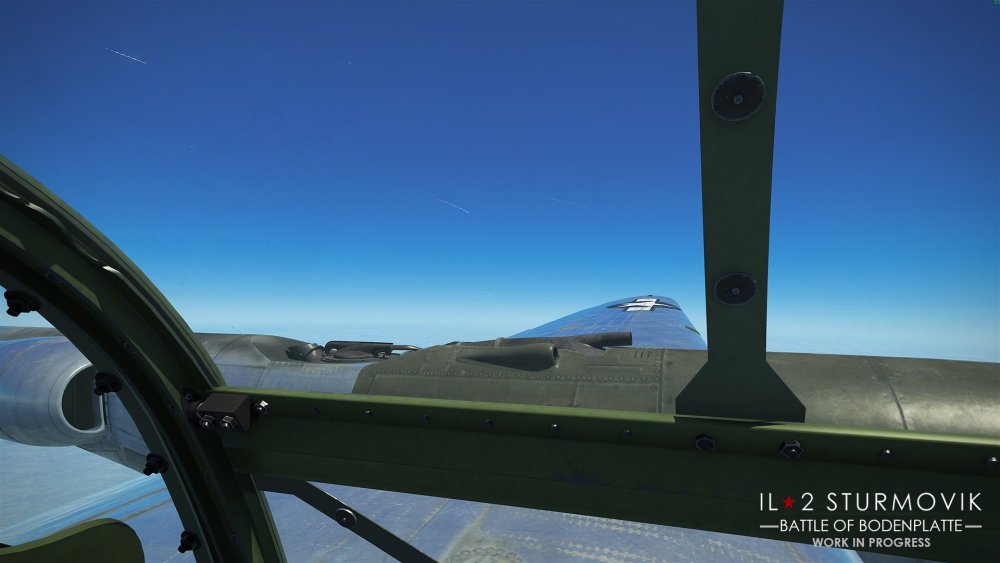 Next Collector Planes in Pre-Production

And last but not least, we have begun preliminary work on a couple cool Collector Planes. We aren’t announcing them quite yet, but they will available for pre-order later this year and then in your hangar next year. Sorry, no hints quite yet!