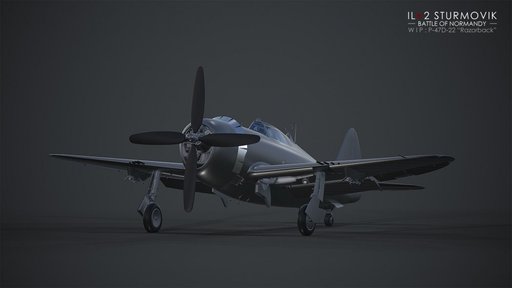 Today I will tell you about changes in the new damage model (DM), which we are preparing for release in the near future. Daniel already mentioned it briefly in previous diaries, and now it is time to talk about the new DM in more detail.

Well, how many lances have broken in talks about broken wings in our community?

That guns are “not damaging”, that the Pe-2 is “rock”, tails of Messers are “cut-glass”, the P-47 is "way too weak" and falls apart after a few hits, and many many other opinions, claims and expectations. To be honest, we ourselves have long wanted to double-check the DM of all aircraft and put things in order there, bringing them all to a common concept. As you remember, we already went into this river a couple of times when we changed the DM settings and tried to find a “middle ground” solution with strength and vulnerability. However, it was obvious for us that all these accumulated problems could be solved only systemically, and this would require a lot of time. Finally, this time has come.

Firstly, from the very beginning, we eliminated several fundamental limitations of the DM-core, which prevented us from moving on. This immediately “untied” our hands and allowed us to simulate combat damage to the aircraft structure much more flexibly. After that, a lot of research was conducted and several methods for calculating the damage of airframe elements from various types of ammunition were tried. The goal of this research was set quite ambitious (however, this is not the first time for us). We wanted to go away as far as possible from using the “game” settings of the DM, and use as many parameters and characteristics of the airframe from real life as possible. This work is not yet completed and right now the new DM is undergoing comprehensive testing (big thanks to our beta testers, and please take more ammo in the hangar!). Nevertheless, now it’s becoming clear that the result of this whole work is exactly this one we really hoped for!

The main news is that our new damage model now uses data taken from blueprints and technical documentation. Such as the number of structural elements of one or another part of the airframe, their material, and geometric dimensions. An engineer who sets up the DM no longer needs to invent anything and rely on dubious empirical data. Now everything is extremely concrete and objective: what figures from documents you put in the model, such resistance to combat damage you get. Our engineering team carefully collected all this data for all 59 aircraft in the simulator. This is a lot of work, and it took a lot of effort and time. But the result was worth it: now all the planes in the Great Battles have such a balance of vulnerability that they, with a very high probability, had in real life.

In the new DM of the airframe, various types of ammunition “work” now in very different ways. Previously, their action differed in the settings of the ammunition itself. Now, the difference in calculation methods, which take into account the principle of causing structural damage in more detail, has been added.

For example, armor-piercing bullets and shells make relatively small external damages on the skin commensurate with their caliber. They do not cause “large-scale” damage to the structure frame anymore, but they do hits like a point strike, hitting through a wing spar for example, or breaking a hinge of elevator or aileron. A broken spar, of course, loses its strength, which makes the wing weaker and leads to break it under the fewer G-load (this is not new in our DM, by the way). But now, using armor-piercing shells to make several damages of the spar in the same area, you need to hit it many times, depending on the spar dimensions and the ammo caliber. In the same way, in order to turn the skin into “rags” or to tear off the landing gear wheel, you need to shoot a rather long time to the particular part of the plane. In other words, firing armor-piercing shells will not be as effective against the airframe as before.  The chance to get into the structural frame and break it is not great, and the skin is not particularly affected. Although, with enough desire and having the presence of a sufficient amount of ammunition, you can "cut" the airplanes apart with armor-piercing projectiles if their weight of fire converges and causes enough damage.

Explosive bullets and high-explosive fragmentation shells are quite another matter. Only a few hits are enough (depending on the model of the projectile, its caliber, the amount of explosive) to make large holes in that part of the plane where you hit, and everything around it was cut with fragments. Managing such an aircraft will become quite difficult. It will noticeably lose its performances and become not a serious opponent in the battle. The structural frame will also receive “zonal” damage, mainly due to a high-explosive impact. So now the effectiveness of this type of weapon against the airframe will be significantly higher than the effectiveness of armor-piercing shells and bullets. The skin will also get damages much faster than the structural frame. Thus, situations, when wings or control surfaces fall off an airplane in a battle, will arise much less often. To break the rear part of the fuselage by shooting will become very hard. Nevertheless, anything is possible.

In addition, in the new DM, we eliminated the problem of inadequate damage to the airframe when firing at those parts of the aircraft that do not contain structural elements. For example, firing at an engine of a twin-engine aircraft or at its propeller spinner can no longer break the aircraft wing. Also, due to the improvement of the DM-core, the old problem of “extra” damages the airframe when the same projectile hit several non-structural collision-zones of this particular part of the airplane was eliminated. A HE shell also will no longer inflict damage on the structural elements of the airframe with its initial kinetic energy of the intact shell, we fixed it.

The new damage model now correctly takes into account the type of material of the structural frame or skin. The same bullets and shells will cause different damage to duralumin, wood, or steel structural elements, making “virtual” holes of various sizes in them.

It is important to mention that this work is about the calculations of damages, and the visualization of the DM (textures and 3D-model) has remained unchanged. As you know, all our planes have three fixed levels of visualization of external damage for each part of the airframe. There are “light” damage (bullet holes and small holes from shells), “medium” damage (larger holes) and “heavy” damage (big holes on the airplane). Each of these three levels switched in sequence. They have been painted by our artists as well as our community enthusiasts with attention to detail for each aircraft. The new calculations in the DM will now switch these three levels of visual damage, taking into account all the features of the action of various types of ammunition and the damage they cause to the skin, which I mentioned above. Thus there is some improvement of DM visualization too. Because of this new DM fine-tuning, the variety of our existing damage textures has improved. They were not properly being expressed in the past. Because of some bugs and errors, parts of the airframe would fly off or fail and a level of damage it should have shown prior to that was skipped or rarely seen.

Moreover, there is another improvement in DM visualization. The visual effects of hitting the plane (sparks, wood chips, etc.), as well as sound effects, will now depend on the part of the plane in which the projectile hit. Even when shooting at the same part, for example, on a landing gear wheel, one can see different effects of hits - sparks from the wheel’s disk (if the disk is metal) or a cloud of “debris” and “dust” from the tire. Also our online players, I think, will be pleased with the news that we found and fixed a bug of no sounds of hitting an airplane in multiplayer (dear God we hope, we hate this problem!).

For sure, making such a large-scale work to improve the DM of an airframe, it was reasonable to take a look at the other areas of the DM. Firstly, we slightly changed the settings of the combat damages of an engine from various projectiles. This was only a preliminary step, and I think that in the near future we will conduct an equally thorough review of the DM for engines and various aircraft systems: control systems, fuel systems, onboard weapons, etc.

Secondly, we rechecked the data for all types of bullets, shells, missiles, and bombs in the game, such as armor penetration characteristics, high-explosive and fragmentation characteristics. Many tests were carried out and many inaccuracies and bugs found were corrected. As well as significantly optimized performance algorithms of DM. The results of this work will affect not only aircraft but also all other game objects: ground vehicles (including detailed tanks), ships, buildings. The common model of high-explosive ammo was substantially improved. The penetrating explosion (inside the object) has become much more effective than the external one. A model of a "random" fragment for distant explosions was created, which takes into account the distance from the epicenter, the dimension of the target, and of course the type of ammunition.

As I wrote above, at the moment the new damage model is undergoing final testing and debugging of core-settings. We are looking forward to completing this work in a couple of weeks.

And we really hope that the result will delight you and bring you many new positive emotions from playing the "Great Battles". This is invariably our top priority.

At the end, I'd like to accompany this boring long-read text with some interesting pictures. Here are the first WIP screenshots of the first Battle of Normandy aircraft - P-47D-22 Razorback. It's a big deal since this is the first time we show you something from this newest project: 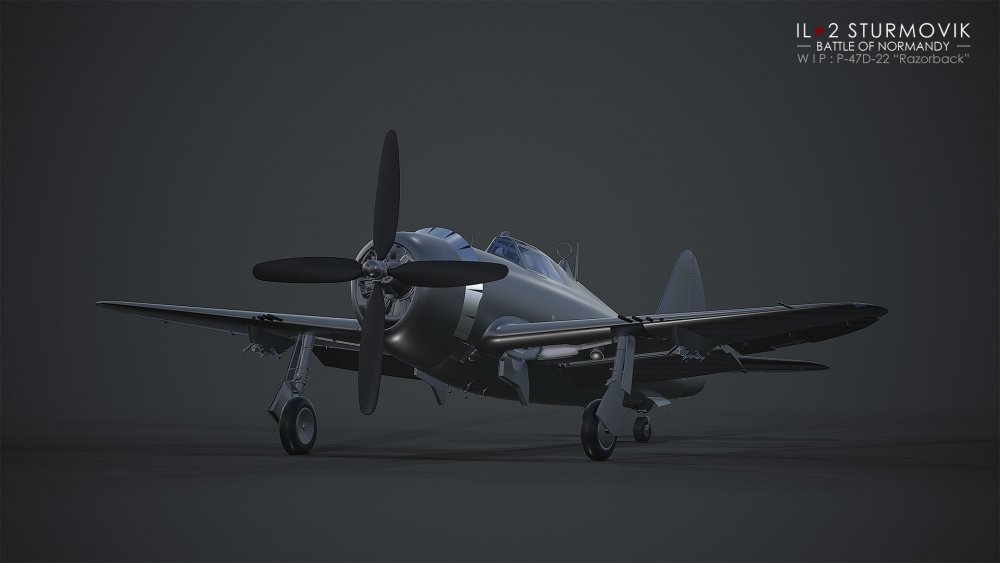 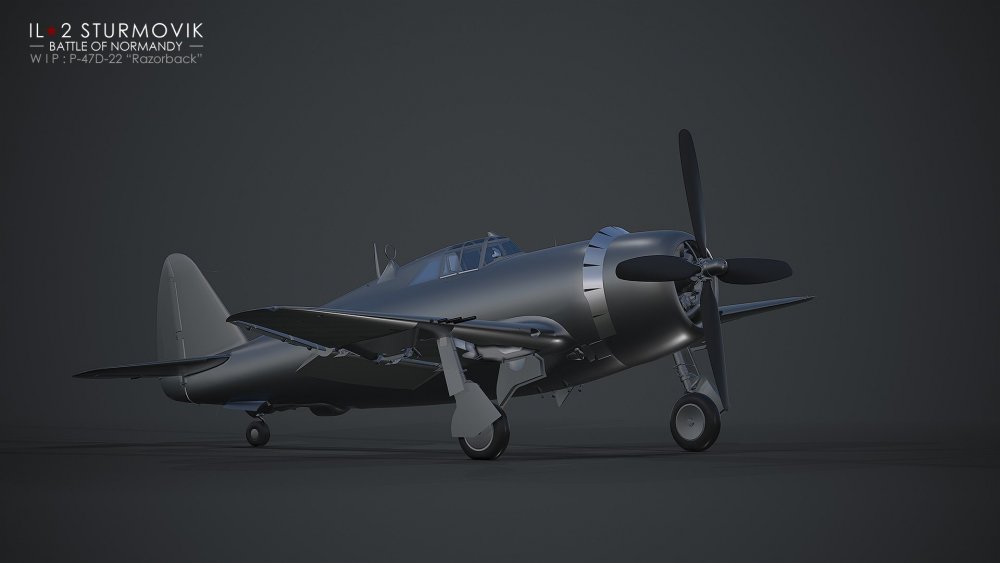 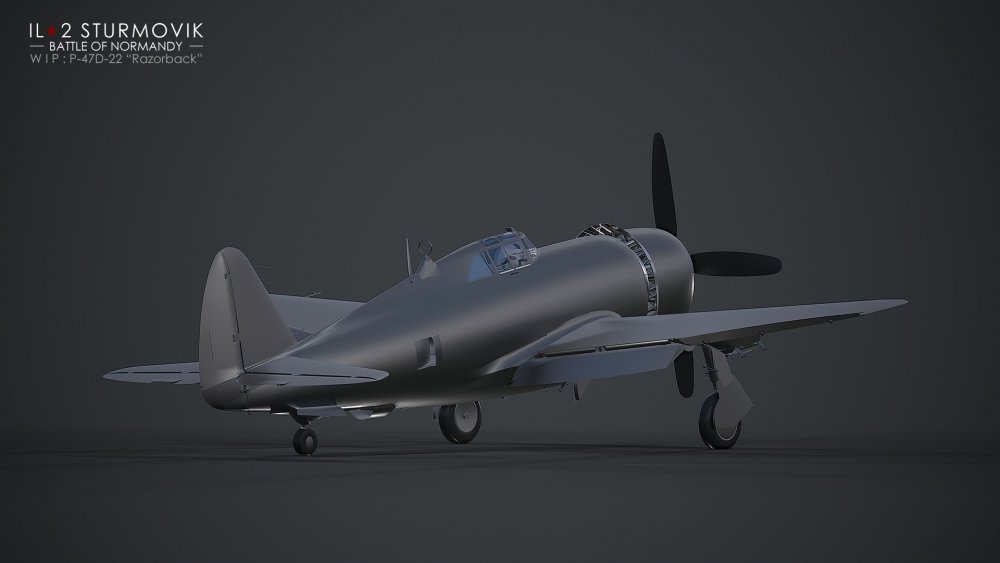 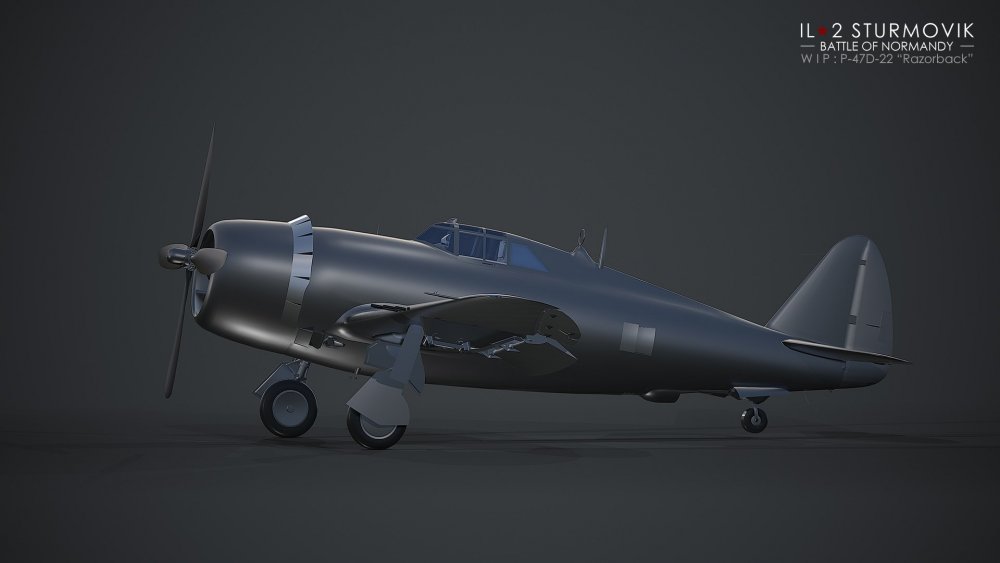 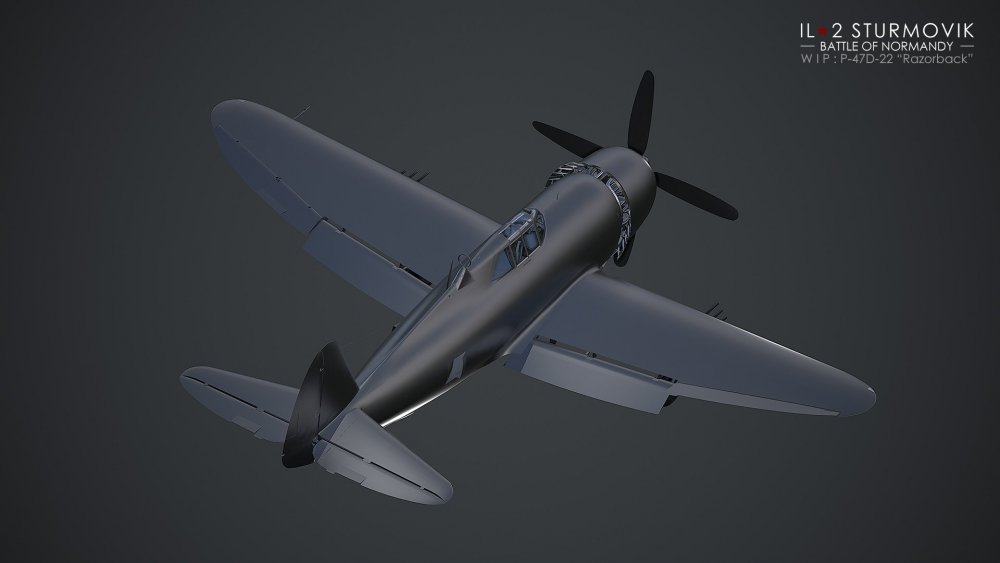 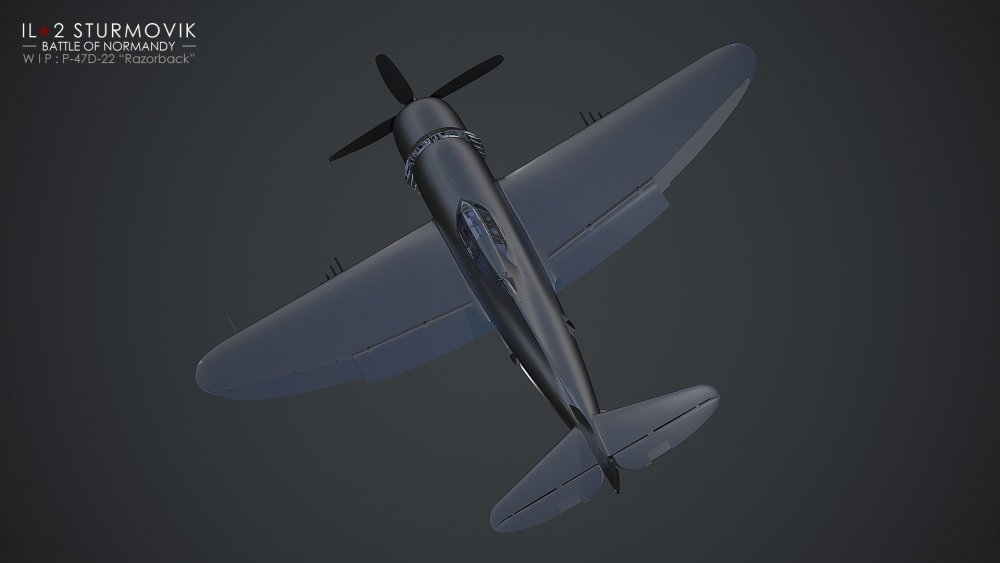