Owners of any IL-2 Sturmovik: Great Battles title can supplement his or her collection of vehicles by buying special Collector Vehicles. They are usable in all modes of gameplay. However, they may not be available in Campaign mode.
This is a keyless non-Steam product. 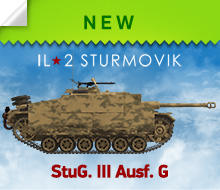 $ 24.99
StuG III Ausf.G Mobile Assault Gun
The Sturmgeschütz III (or StuG III) assault gun was one of the Germany’s most-produced armored fighting vehicles during World War II and saw action on all fronts in both Europe and North Africa. Initially deployed as a mobile armored light gun for infantry support, the StuG III underwent constant revisions throughout the war and was eventually heavily employed in the tank destroyer role.

The StuG III Ausführung (Ausf.) G was the final and most common variant of the StuG III series with approximately 8400 built. Production of the type began in December 1942 and ended in April 1945. Panzer III Ausf. M chassis and Maybach HL120 V-12 gasoline engine rated at 296 horsepower allowed for a top speed of 40 km/h (25 mph).

This StuG III Ausf. G was armed with the 75 mm Sturmkanone 40 (StuK 40) L/48 that was a modification of KwK 40 tank gun with different recoil absorbers (you may be already familiar with it from Pz.IV tank included in Tank Crew). Additionally, a shielded 7.92 mm MG 34 light machine gun was fitted above the loader’s hatch and spaced armor plates were also added to the vehicle front and sides from May 1943.

Our StuG. III Ausf. G can be used in both single-player and multiplayer scenarios. 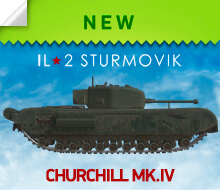 $ 24.99
Churchill Mk.IV Heavy Tank
The Churchill was a British heavy Infantry Tank that first saw combat during World War II in 1942 and remained in service in the postwar era until 1952. One of the heaviest Allied tanks of the war, the Churchill went into action for the first time during the Dieppe Raid in France in August 1942 and also saw action in North Africa, Italy, and on the Eastern Front. The chassis design proved very versatile and it was used as the basis for many specialized vehicles throughout the war.

The Churchill Mark IV was the most numerous of the series, with 1,622 produced. This variant was virtually identical to the Churchill Mark III, with the main difference being a cheaper and better-protected cast turret. A Bedford 12-cylinder gasoline engine powered the tank and was capable of providing 350 horsepower. The tank’s top speed was around 24 km/h (15 mph), but Soviet tests claimed that a Churchill Mark III reached 28 km/h (17 mph). The main armament of the Churchill Mark IV was the Ordnance Quick-Firing (QF) 6-pounder gun of 57mm caliber. The solid AP round featured a fairly high armor penetration but did not have a bursting charge, reducing its after-penetration effect. Also, the lack of high-explosive fragmentation shells in the ammunition load was limiting its versatility. The secondary armament consisted of one coaxial 7.92 mm Besa machine gun mounted in the turret, second Besa machine gun fitted in the hull and 2-inch mortar in the turret roof. The model featured in the sim is produced by the Leyland factory and has Mk.V gun with a 50-caliber long barrel.

Churchills took part in the battles on the southern face of the Kursk Bulge in the summer of 1943. There, as part of the 2nd Guards Tatsinsky Tank Corps, they fought against the German Totenkopf and Das Reich Panzer Divisions. Alongside, on the same section of the frontline, Churchills served with the 5th Guards Stalingrad Tank Corps and the 18th and 2nd Tank Corps. Each of these Corps included 21 Churchill tanks, a total of 84 tanks - a third of the total number of tanks of this type supplied under Lend-Lease during the war.

2-inch mortar fixed on the roof of the turret, on the loader’s side, was intended for remote smoke screen deployment with smoke grenades fired at a distance of about 400 meters. In the reality of the Eastern Front, the Red Army often used Soviet 50-mm high-explosive fragmentation rounds as ammunition for 2-inch English mortars, so in the sim you have the option to replace some of the smoke ammo with HE rounds. Besides the mortar, the tank was equipped with two pyrotechnic smoke dischargers mounted on the rear that allow the tank to deploy a smoke screen for a minute and a half.

Our Churchill Mark IV represents tanks used in the battle of Kursk, has Soviet crew models and can be used in both single-player and multiplayer scenarios. You can play it in Quick Mission Builder mode on any map you have but the Tank Crew Prokhorovka map is recommended since it is designed for ground engagements and has higher landscape detail than the other maps designed for aerial battles. 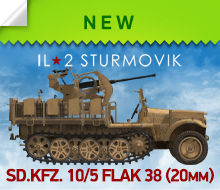 $ 24.99
Sd.Kfz. 10/5 Flak 38 (20mm) Vehicle Mounted Anti-Aircraft Gun
The Sd.Kfz. 10 or Sonderkraftfahrzeug (special motorized vehicle) was a German half-track that saw action throughout World War II and on all fronts in Europe and North Africa. Its main role was as a prime mover for small towed guns or liquid agents and it could also carry eight troops. Different models could be specialized for a wide range of duties.

It was powered by a Maybach 6-cylinder water-cooled gasoline engine. It had a semi-automatic Maybach Variorex-transmission with seven forward and three reverse gears. It could attain 65 km/h (40 mph), while the cruising speed was 45 km/h (28 mph). Steering was performed by both the front wheels and caterpillar threads. Shallow turns were done using the front wheels and sharper turns were done using the treads with one braking like a tank would.

Sd.Kfz. 10 /5 carried the Flak 38 anti-aircraft gun in its rear bed and fired a 20mm projectile. The Flak 38 was an improvement over the older Flak 30 design and it had a rate of fire of 220 rounds per minute and weighed 420 Kilograms. Its use was ubiquitous throughout the war in all German theaters of operation and was the most produced artillery piece of the war by the Germans. Later designs mounted four Flak 38 cannons together for an added punch. The Flak 38 could also be towed by trucks or other vehicles when not mounted on Sd.Kfz. 10 half-tracks. In the right hands this gun was deadly to low flying Allied fighters.

Our Sd.Kfz. 10 /5 Flak 38 can be used in both single-player and multiplayer scenarios and it will include several custom-made missions to demonstrate its ability at knocking down enemy planes. 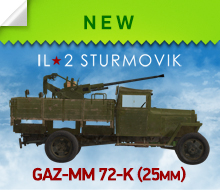 $ 24.99
GAZ-MM 72-K (25mm) Vehicle Mounted Anti-Aircraft Gun
The GAZ-MM was a double-axle 1.5-ton truck used for both general purpose and specialized purposes by the Soviet Union during WWII. It was a licensed copy of the American built Ford-AA truck, albeit a simpler version with a more powerful motor than the original GAZ-AA truck. At the outbreak of WWII the Soviet Union had over 150,000 vehicles in use and by the end of it’s production run there were nearly 1 million vehicles built. During the war, several different versions of the GAZ-MM appeared, some with no doors, bumpers and some with no front brakes and only one headlight. These changes were made to keep production costs and time as simple as possible. It was a rugged truck and served the Soviet Union well during the war.

The Soviet 25mm automatic air-defense gun M1940 or 72-K as it was known was designed for protecting infantry units from air attack. It was normally mounted on a four-wheeled carriage that could be towed by a truck or other vehicle. It had a slant range of up to 2.4km and could hit aerial targets up to 2km in altitude. The gun could also be used against ground targets and light vehicles if necessary. It was manned by a six-person crew and was an automatic weapon with rounds loaded from the top via a feeding mechanism. The 72-K saw extensive use by the Soviet Union’s armed forces for many years only being finally phased out in the 1960s.

When loaded into the bed of a GAZ-MM truck it becomes a mobile AAA battery allowing you to protect an armored column, supply convoy, infantry unit or a stationary target like an airbase with accurate and deadly fire.

Our GAZ-MM 72-K can be used in both single-player and multiplayer scenarios and it will include several custom-made missions to demonstrate its ability at knocking down enemy planes.