Well, this weekend will not go as we planned. We are not ready for a public test of multiplayer scheduled for today. This was a hard decision, which made only an hour ago, and we had to go through intense debate to get to it. But we're sure that such test would have been useless for us and wouldn't be enjoyable for you. Some of connections inside the project must be properly tested. At the same time, the fresh changes and updates may not only influence the multiplayer mode itself but also may lead to failures of the early access version, including broken login procedures, content unavailability, etc.. Today's version has not been tested yet, and we can't take such a big risk. It's even bigger than with weekly published early access builds, and you trust me here - that risk is always high. Thus, I decided to postpone the public multiplayer test for 1 more week minimum. We'll devote all that time to testing and quality assurance.

As a substitution of the delayed MP test, we'll unlock Yak-1. It's not how we planned to release it as well, it's too early for it but luckily we can afford that now. Some of you may be extremely disappointed, some - slightly upset and others may be delighted with this new addition to the early access - a whole new plane, and a good one, I might add. Game access will be granted at usual time later today. Thanks a lot for your support and understanding. Looks like we'll need to work even harder to speed up development of this module. Well, hardships harden the character.

You can discuss the news in this thread. 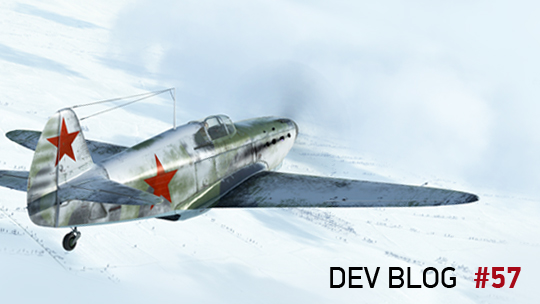 The past few days have brought several significant changes. First, we have three game versions now: early access, closed beta and an internal developer version which as you can imagine is the most content rich one. But what's more important is that closed beta version is already way ahead of the early access build. This means that the playable version goes through a double bug hunting filter, but also still fits within our timelines - that's a solid attribute of a controlled release schedule by the way. So both content and game mechanics get properly tested and you get to play the most bug and glitch proof game build that can be possibly provided at the current stage.

As it was said before, we are keeping up a good pace and the beta version is currently ahead of the early access by two planes (Yak-1 and Pe-2) and two game modes: Quick Mission builder and Multiplayer. If we keep this up we’ll have a quality game to release. Meanwhile, flying the Pe-2 is a peculiar pleasure. It's hard for me to describe all the tiny traits of its character with words, so let's take landing for example. Somehow it makes me adore and hate this plane at the same time. Landing speed is so low that it nearly matches the stall speed, that's why landing actually looks like a series of bounces on the airfield or more like a landing turns into a control semi-spin at ultra-low altitude (it may sound like a joke, but it's pretty much true).

Read the whole developer diary on the forum.

It’s been a great week - just like all the others. But it is very easy to see how fruitful it was - because you’re getting Ju 87 for Early Access sessions! We must leave some features of the IL-2 for future investigations and testing - don’t you worry though, the Sturmovik beast now has a contester on the German side. So now with the new launcher, you just wait for the evening and click Play – and then try out this mighty weapon of Blitzkrieg.

Of course you’ll notice that Stuka has its own specific temper - as does every aircraft in IL2BOS. And we’ve prepared missions for your new Ju 87 that will reveal its powers and maybe even some week points; discover them all and you won’t regret it.

By the way we decided to update the screenshots section on our website. And it would be great if you helped us with it. Please, run the game on max graphical quality setting, find an impressive shot and send us the picture without any editing. We’ll pick the best screenies, will put them on the site, and probably make some of you famous - because your nicknames will be there. :) Please, post the screens in this topic (click here), and we’ll announce the result by the end of next week. 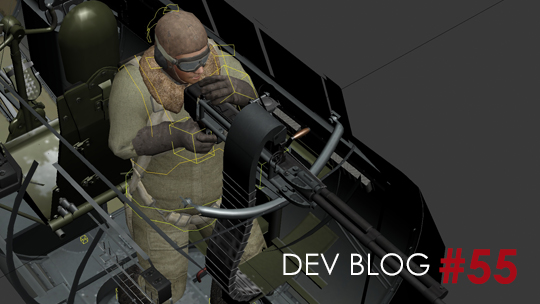 During the next session you will experience the same mission with the IL-2, but from other points of view like piloting a LaGG in covering missions and the Bf-109 in interception scenarios. So Sturmoviks will be going on missions under AI control, and you will have a chance to try it out in new tactical roles.

This week's main update is actually important for the whole project. We are releasing the game launcher - a special application that keeps your client up-to-date. It also does the following: 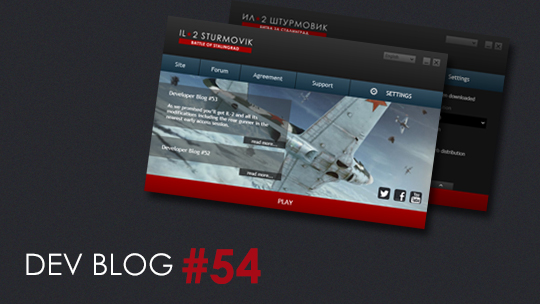 As we promised you’ll get IL-2 and all its modifications including the rear gunner in the nearest early access session. Note that it’s not complete yet, for instance, a lot of gauges are disabled and the armored protection may be not 100% correct, but in general IL-2 is ready for early access.

AA crews were sent for extra training which means that: a) they are better shooters and more dangerous to careless pilots; b) they will die if you shoot them or bomb them. Another addition that shows our warm care for the AA crew guys is that the Germans now have searching lights to hunt down LaGGs in the night sky around the Stalingrad region. In this version they can be found near the Lapino airfield which we believe you already love.

Read full news and discuss them on the official forum.

Also we present you this record of the latest stream with developers.